Malaysian PM, on official visit to the Philippines, says Manila should regulate or limit Beijing influences

Malaysian Prime Minister Mahathir Mohamad yesterday cautioned the Philippines over falling into a "debt trap", as the country banks on China to bolster growth.

"If you borrow huge sums of money from China and then you cannot pay, when the person is a borrower, he is under the control of the lender. So, we have to be very careful about that," Tun Dr Mahathir, who was on a two-day official visit to the Philippines, told ABS-CBN News.

He said countries like the Philippines should "regulate or limit influences from China".

Since returning to power last year, he has repeatedly vowed to renegotiate or cancel what he calls "unfair" Chinese infrastructure deals authorised by his predecessor, Najib Razak, whose near-decade-long rule ended in electoral defeat amid a massive financial scandal.

Taking a different course, Philippine President Rodrigo Duterte has been courting investors in China to help fund his US$108 billion (S$146 billion) programme to build new highways, railways, airports, piers and bridges in the next 10 years.

Critics warned that this pivot to China could lead to a "debt trap", citing the experience of Sri Lanka, which had to cede control over its two major ports after it failed to pay back its debts to China.

Philippine Finance Secretary Carlos Dominguez said this was unlikely to happen in the Philippines. 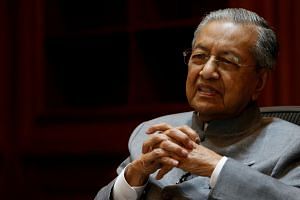 Mahathir: Extremism will spread across South-east Asia, get worse in the future

He said Chinese loans would account for just 4.5 per cent of the country's total debts by the time Mr Duterte steps down in 2022.

Dr Mahathir also warned the Philippines against letting in a huge number of Chinese workers that could "disturb the political equations".

At least 200,000 Chinese have flocked to Manila since Mr Duterte's 2016 election, many of them employed by online gaming firms that cater to Chinese players.

"So long as they are not going to be permanent residents, it is not a danger to the Philippines," Dr Mahathir said. "But if huge numbers of any foreigners come to live and stay in the country or even to influence the economy, then you have to do some rethinking, whether it is good or bad or the limits we have to impose on them."

In a news conference with Mr Duterte later in the day, Dr Mahathir offered Malaysia's help to ensure a new, self-administered region for Muslims in war-torn Mindanao island would flourish.

Last month, over 1.5 million Muslims voted overwhelmingly in favour of a law carving out a vast region where a Muslim-led government will have greater control over taxes and social services, in hopes of ending a decades-long separatist war and reining in a new wave of extremism sweeping across Mindanao.

"Given the vast economic potential of this area, I believe with the establishment of the Bangsamoro Autonomous Region in Muslim Mindanao, we have to boost economic ties between both countries. I assured (Mr Duterte) of Malaysia's desire to continue to be of help in the development of Mindanao," he said.

Mindanao is home to most of the Philippines' nickel mines and biggest fruit farms, besides vast tracts of land that the government wants to convert into palm oil plantations.

About five million Muslims live on the island, which is the size of South Korea. Its notorious clan wars, lawlessness and conflicts between the government and Muslim and communist rebel groups, though, have kept investors at bay.