Dozens of cases linked to city's largest wholesale food market; workers and 46,000 nearby residents to be tested

Beijing yesterday declared an area surrounding a wholesale market "high risk" after dozens of new coronavirus cases emerged, sparking fears of a second wave of infections in the capital.

The health authorities reported 44 new infections in the city, all of whom were linked to the Xinfadi Wholesale Market, which has since been shut down.

All the market's workers and some 46,000 people living in the vicinity will have to undergo mass testing, the authorities said.

Thirty-six of the cases were detected on Saturday during mass testing of market workers, while eight new infections were reported early yesterday.

Many of them were people who had visited the market or were close contacts of those who had, the Beijing authorities said, adding that 11 infected people live in the same neighbourhood.

All markets, dining outlets and logistics companies countrywide have been ordered to undergo disinfection, said a statement from a coronavirus task force led by Premier Li Keqiang.

With the market very densely populated with huge movements of people, contact tracing needs to be carried out in the "most stringent" way, added the task force.

The government has also declared Fengtai, the area where the market is located, to be a high-risk area. 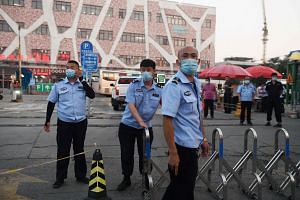 Residents in 11 estates around the market were ordered to stay home starting from Saturday, with food and groceries being brought to their door by local community workers.

The move harks back to lockdowns enforced in much of China earlier this year when the outbreak was in full swing. Much of the domestic situation has come under control through the strict enforcement of such shut-ins, but pockets of cases have continued to surface.

Meanwhile, the National Health Commission said two other local infections reported in China yesterday were in north-eastern Liaoning province, about 670km away, and were linked to the Xinfadi cluster. A further 19 infections were imported by Chinese returning home from abroad.

The authorities have been quick to reassure Beijingers that their food supply will not be disrupted by the market's closure, saying that there are alternative distribution channels. Xinfadi, the city's largest wholesale food market, is believed to supply nearly 90 per cent of Beijing's fruit and vegetables.

Local media images showed dozens of police and paramilitary officers surrounding the sprawling market yesterday, which has been barricaded.

That the recent outbreak started in a market has also sparked fresh concerns about hygiene and food safety, especially after traces of the coronavirus were found on a cutting board used for imported salmon at the same market.

As a precaution, major supermarkets have pulled the fish off shelves and Beijing has ordered the entire city to undergo a thorough food safety inspection.

Dr Wu Zunyou, chief epidemiologist at the Chinese Centre for Disease Control and Prevention (CDC), said it is now imperative to investigate Xinfadi's food supply chain to determine how the virus entered Beijing.

"Beijing has not had any new coronavirus infections for over 50 days... If all the new cases don't have a travel history of leaving the city and have truly been infected here, then it is possible that imported foods or contaminated foods from outside the city have brought in the virus," he added.

Genetic sequencing of the virus has shown that it came from Europe, according to an expert from the Beijing CDC.

"The preliminary judgment is that the virus was imported," Dr Yang Peng said in an interview with state broadcaster CCTV.

"But it is still unclear exactly how the virus (entered China). It could possibly be from contaminated seafood or meat, or have been carried into the market by people."

Expert not surprised at turn of events

Dozens of coronavirus infections emerging from a Beijing wholesale centre have once again put such markets under the spotlight.

The virus first surfaced late last year at the Huanan Seafood Wholesale Centre, a market in the central Chinese city of Wuhan, where workers were among the earliest cases.

But unlike the Huanan market, where wild animals were sold for meat, the sprawling Beijing complex sells mostly farm products, supplying up to 90 per cent of the city's vegetables.

Xinfadi, the biggest of such wholesale centres in Beijing, supplies supermarkets, grocery stalls and even small corner stores.

Usually a bustling hive of activity, it is unsurprising the virus resurfaced there because of close interaction, and even exposure to imported food items, said Dr Wu Zunyou, chief epidemiologist at the Chinese Centre for Disease Control and Prevention, in an interview with the official Xinhua news agency.

"With tens of thousands of new cases globally, it could be that an infected person overseas contaminated meat or seafood while handling it," Dr Wu added.

"The virus could have stayed alive longer because of the cool environment, and someone touching the contaminated produce could have rubbed their noses or eyes after, thus getting infected."

Since the early stages of infection present mild symptoms, it is possible the person continued going to work, thus spreading the virus to others, Dr Wu added.