SEOUL -America's B-52 nuclear bombers are unlikely to participate in air drills between the US and South Korea after Pyongyang pulled out of planned high-level talks with the South to protest against the exercise, reported local media on Wednesday (May 16).

A source in the South Korean military said on Wednesday that US F-22 Raptor stealth fighters are participating in the drills, which kicked off last Friday (May 11), but B-52 bombers have not joined yet and are unlikely to take part, reported KBS News.

"In the training, the US F-22 stealth fighters have already participated, while the B-52 has yet to join," a source told Yonhap news agency.

"It appears that the B-52 may not attend the exercise, which runs through May 25."

With a range of 12,900km on just one tank of fuel, the B-52 is able to reach pretty much anywhere in the world. It has already seen action during the war in Vietnam and more recently in Afghanistan and Iraq.

The reported move to withdraw B-52 from the exercise came after North Korea on Wednesday (May 16) said it was indefinitely postponing the high-level dialogue in an angry response to the military drills.

"The South Korean authorities, together with the US, has been staging the largest-ever '2018 Max Thunder' joint air drill throughout south Korea since May 11 in a bid to make a pre-emptive air strike at the DPRK and win the air," the North's official Korean Central News Agency said in a report.

"There is a limit to the amount of good will and chances we can give," the KCNA said.

Pyongyang also threatened to call off the landmark encounter with US President Donald Trump that is slated for June 12 in Singapore.

The drills was a "deliberate military provocation" that had violated the inter-Korean summit declaration, said KCNA. 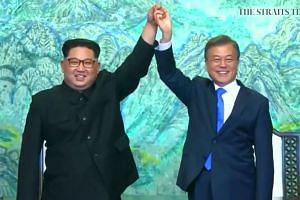 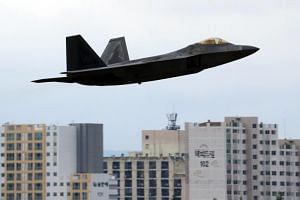 Since then officials from both sides have held several meetings to discuss follow-up measures to the summit promises.

South Korea said the North’s decision to unilaterally postpone the talks was “regrettable”.

“Such action of the North is inconsistent with the fundamental spirit and purpose of the Panmunjeom Declaration agreed by the South and North leaders on April 27,” the South’s Unification Ministry spokesman Baik Tae Hyun said. He urged the North to swiftly return to the talks, reported Reuters.

South Korea's unification minister Cho Myoung Gyon, when asked if the Seoul government will make its stance clear on the North's decision, told reporters on Wednesday: "We will send our own message via fax. We are currently reviewing what content should be included in it."

An official from the presidential office Cheong Wa Dae said officials from the National Security Office the unification, foreign and defence ministries are working to find out North Korea's true intention behind the abrupt cancellation of inter-Korea talks.

Kim’s latest move could be aimed at testing Trump’s willingness to make concessions ahead of the summit, which is due to be preceded by a visit to Washington next week by South Korean President Moon.

A US government expert on North Korea said Kim may also be trying to gauge whether Trump is willing to walk away from the meeting that has prompted the president’s supporters to suggest he deserves to win a Nobel Peace Prize, reported Reuters.

The pre-dawn announcement caught Trump administration officials off guard and set off an internal debate over whether Kim was merely posturing in advance of the meeting in Singapore next month or was erecting a serious new hurdle, reported New York Times.

Pyongyang always reacts angrily to the joint US-South Korea military exercises, considering them a rehearsal for an invasion. But this year, with the sudden burst of diplomacy, had appeared to be different.

The South Korean and US militaries had scaled back and played down the exercises, declining the news media the usual access to the drills.

North Korea said barely a word about the drills during the computer simulation exercises that took place through April. But the two-week-long Max Thunder drills between the two countries' air forces have clearly struck a nerve, reported Washington Post.

Pyongyang has repeatedly shown its aversion to the deployment of the B-52 bomber, part of the US nuclear umbrella, over the peninsula.

It is hosted by South Korea's Air Force Operations Command and the US 7th Air Force.

South Korea's Defence Minister Song Young Moo is set to hold an emergency meeting with General Vincent Brooks, the commander of US Forces Korea, apparently to discuss the North's protest, according to Yonhap.