SEOUL (AFP) - Former South Korean president Lee Myung Bak was on Thursday (March 22) arrested over corruption, the last of the country's four living ex-leaders to be embroiled in a criminal inquiry.

The 76-year-old business CEO-turned-president - who served from 2008 to 2013 - faces multiple charges including bribery, power abuse, embezzlement, and tax evasion.

He is the fourth surviving former South Korean leader to be detained over corruption.

Live TV footages showed Lee, wearing a dark coat with a tie, emerge from his house, shake hands with his former aides and get into a car with darkened windows.

Afterwards, the car and a convoy led by police motorbikes were seen entering the Seoul Eastern Detention Centre.

"I don't blame others. All are my faults and I feel remorse", Lee said in a hand-written statement, a photograph of which was posted on his Facebook account.

"With my arrest, I just hope the suffering faced by my family members and those who worked with ease somewhat," he said.

Lee, who denies most of the charges against him, will receive a brief health check before changing into a prison garb with an inmate number and sleeping in an 11-square metre solitary cell, Yonhap news agency said.

"It is acknowledged that many of the charges are backed by evidence... and there are risks of the accused seeking to destroy evidence", it said in a statement explaining the need for his arrest.

If convicted of all the allegations, he could be jailed for up to 45 years, Yonhap said.

South Korean presidents have a tendency to end up in prison - or meet untimely ends - after their time in power, usually once their political rivals have moved into the presidential Blue House.

All four former South Korean presidents who are still alive have been convicted, charged or investigated for criminal offences.

Conservative Lee's successor Park Geun Hye was ousted last year over a massive corruption scandal that emerged in 2016, and the verdict in her bribery and abuse of power trial is due next month, with prosecutors demanding 30 years in jail.

Chun Doo Hwan and Roh Tae Woo, former army generals who served through the 1980s to early 1990s, served jail terms in the 1990s for corruption and treason after leaving office. 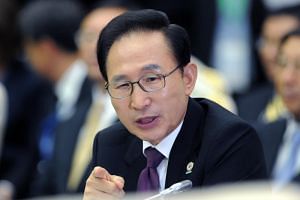 Lee Myung Bak: From businessman to Seoul mayor and president

Both Chun and Roh received presidential pardons after serving about two years.

Prosecutors said Lee's crimes are "almost as serious as" those committed by Park, who is in custody at a different detention centre.

Lee has been charged with accepting a total of some 11 billion won (S$13.4 million) in bribes between late 2007 when he was elected president and 2012, according to prosecutors' documents.

These allegations include claims that the Samsung Group bought a presidential pardon in 2009 for its chairman Lee Kun Hee, who had been convicted of tax evasion and given a suspended jail sentence.

Samsung allegedly paid 6 billion won in legal fees to a US law firm in instalments between 2007 and 2011 on Lee's behalf.

The US law firm was representing DAS, an autoparts company Lee allegedly owns under the names of his relatives.

DAS was at that time in a court battle against a US businessman in order to be paid back 14 billion won the company had invested in his bankrupt investment company.

Both Samsung and Lee have denied the allegations as groundless.

Separately, prosecutors claim Lee embezzled 35 billion won from DAS over 12 years between 1994 and 2006.