HONG KONG (AFP) - Once dubbed "Asia's Finest", Hong Kong's police are fighting allegations of using excessive violence against protesters, their headquarters besieged twice in the last week as calls for an independent inquiry into their tactics swell.

The international finance hub witnessed the worst political violence in a generation as police fought largely young demonstrators opposed to a now postponed plan to allow extraditions to the Chinese mainland.

The tear gas was initially deployed against small but hardcore groups of protesters - some throwing projectiles and using metal barriers as battering rams - who were trying to occupy the city's Parliament on June 12.

But the police response morphed into a sweeping clearance operation as officers turned their weapons on larger, mostly peaceful crowds of demonstrators who had occupied nearby roads.

Mr Wu found himself in between police and demonstrator lines as a tear gas canister exploded behind him.

In scenes caught on video that went viral, Mr Wu calmly walked towards the police, his hands raised, asking to speak to the commanding officer.

"I believe I posed no threat to the police and I wanted to be a mediator," he recalled to AFP. 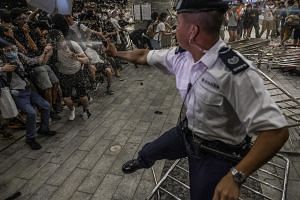 Hong Kong police, once called 'Asia's finest', are now a focus of anger

"I hoped the police would allow the protesters to leave safely and peacefully." But his pleas fell on deaf ears. Police fired a round of tear gas close to his feet and he was forced to retreat.

'NO CHOICE BUT TO ESCALATE'

That video was just one of many from that day which have deeply polarised attitudes towards Hong Kong's police, who will come under scrutiny again on Monday (July 1) when the city hosts another protest, with organisers expecting a huge turnout.

The force did not respond to requests for comment or to interview front-line officers.

But police chief Stephen Lo has called the June 12 protest a riot, with officers facing "life-threatening acts" and having "no choice but to escalate the use of force".

The city's pro-Beijing leader Carrie Lam - who has not been seen in public for over a week - has similarly thrown her weight behind officers, praising them in a statement last Thursday for their "distinguished professionalism and restraint".

Supporters of the police are also planning to rally on Sunday.

Yet public anger towards the force - especially among younger Hong Kongers - shows little sign of abating. 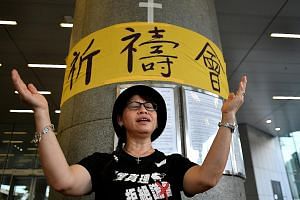 From memes to wordplay: Hong Kong protesters turn to humour

Twice now, police headquarters have been blockaded by large crowds of protesters, among whose demands are an independent inquiry. Cleaners have had to repeatedly scrub walls of egg shells and graffiti.

Angry chants of "hak ging" - black cops - have now become commonplace, a pun on the phrase "black societies" which is used to describe triad gangs.

But it is not just protesters criticising the police.

Calls for an independent inquiry have come from a wide spectrum of former officials, rights advocates and legal groups, including the influential Hong Kong Bar Association.

"This has put tremendous pressure on front-line officers, who are caught between a rock and a hard place: civilian protesters who despise them and police management that issue orders to 'shoot to wound'," Mr Jason Ng, convener of the Progressive Lawyers Group, told AFP.

Political analyst Dixon Sing said there is little faith that the police will adequately investigate themselves.

"People surrounded the headquarters because they do not see that justice will be done by the current investigation mechanism," Mr Sing said.

He said the force's reputation was already struggling after officers were used to suppress pro-democracy "Umbrella Movement" protests in 2014 that won no concessions from Beijing.

When officers were filmed beating up a protester, the police's own investigation initially recommended no charges. And when a court finally did jail the officers, thousands of their colleagues rallied in a park against the conviction.

"Many people in Hong Kong, not just protesters but the general public, saw that the police were being manipulated... to repress the largely peaceful Umbrella Movement," Mr Sing said.

Locals, media and the government's own literature often refer to the force as "Asia's finest" and Hong Kong remains a remarkably safe place to live with low levels of theft and violent crime, despite huge inequalities.

Officers were lauded for their efficiency and honesty while many of their counterparts across Asia earned reputations for brutality and graft.

But critics say the force being used as the speartip of Beijing's efforts to suppress growing calls for democracy risk fatally undermining that history.

"The rapid decline has coincided with a ratcheting up of force unleashed on unarmed and largely peaceful protesters," concluded Mr Ng.

"The public image of... Asia's Finest has gone from bad to worse."