SYDNEY (AFP) - Australia said on Friday (Feb 15) that a long-awaited trade deal with Indonesia will be signed in March, following months of diplomatic tension over Canberra's contentious plan to move its embassy to Jerusalem.

The multibillion-dollar deal will include improved access for Australian cattle and sheep farmers to Indonesia's 260 million people, while Australian universities, health providers and miners will also benefit from easier entry to South-east Asia's biggest economy.

Greater access to the Australian market is expected to spur Indonesia's auto and textile industries, and boost exports of timber, electronic and medicinal goods.

"This a strong deal for both our countries, which will increase the two-way flow of trade and investment, creating more opportunities for farmers, businesses and economic development," Australia's Minister for Trade Simon Birmingham said.

The deal has been in negotiations since 2010 and was expected to be signed before the end of last year before it stalled when Prime Minister Scott Morrison proposed the relocation of Australia's embassy to Jerusalem.

Mr Morrison first floated the shift in October, ahead of a critical by-election in a Sydney suburb with a sizeable Jewish population. 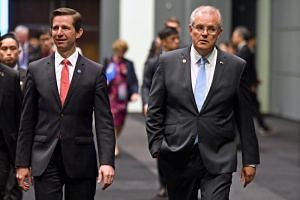 Indonesia, the world's most populous Muslim nation, was angered by the proposal.

Both Israel and the Palestinians claim Jerusalem as their capital.

Most nations have avoided moving embassies there to prevent inflaming peace talks on the city's final status - until US President Donald Trump unilaterally moved the US embassy early last year.

In December, Mr Morrison formally recognised west Jerusalem as the capital of Israel, but said the contentious embassy shift from Tel Aviv will not occur until a peace settlement is achieved.

He stood by his decision despite an outcry from neighbouring Muslim countries, while Indonesia in response simply said it had noted the decision.

"Indonesia is the third-largest democracy in the world with a fast-growing economy, making the strengthening of our ties both strategically and economically important," Mr Birmingham said in a statement.

"I've continued to have very constructive discussions with a number of Indonesian Ministers in the last few months and am pleased to be finalising arrangements that we hope will achieve a March signing," he added.

"All the issues have been discussed and negotiations have been finalised," he told reporters in the capital, Jakarta.

A March signing will come within months of an expected Australian election, where polls have Mr Morrison's conservative coalition facing a loss.

The deal also comes just ahead of national polls in which Indonesian President Joko Widodo is pushing his economic record in the battle for re-election.