SYDNEY (AFP, REUTERS, THE STAR/ASIA NEWS NETWORK) - Australia's conservative Prime Minister on Sunday (Dec 16) stood by his decision to recognise West Jerusalem as the capital of Israel, despite criticism from neighbouring Muslim countries.

But a contentious embassy shift from Tel Aviv - a proposal made during a crucial Sydney by-election that critics said was timed to attract Jewish voters - will not occur until a peace settlement is achieved.

Australia's Muslim-majority neighbour Malaysia said on Sunday that it "strongly opposes" the decision to recognise West Jerusalem. The announcement was "premature and a humiliation to the Palestinians and their struggle for the right to self-determination", the government said in a statement advocating a two-state solution to the Israeli-Palestinian conflict.

Prime Minister Mahathir Mohamad said on Sunday that the Australian government has no right to interfere in the situation between Israel and Palestine regarding Jerusalem.

"In the eyes of Arab countries, this is not something you can accept," Tun Mahathir, who was on a visit to Thailand, said. He was responding to a question asking him why he had raised concern about Australia's decision to move its embassy last month.

Australia's immediate neighbour Indonesia, the world's most populous Muslim nation, was angered by the embassy move proposal in the run-up to the by-election. Its foreign ministry spokesman, Mr Arrmanatha Nasir, noted on Saturday that Australia had not moved its embassy to Jerusalem and called on all members of the United Nations to recognise a Palestinian state “based on the principle of two-state solutions”.

Citing Jakarta's response, Mr Morrison said on Sunday that the international reaction had been "measured" and that his decision would progress a two-state solution. 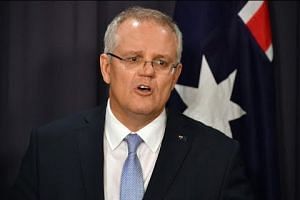 Israel welcomes Australia's recognition of west Jerusalem as its capital

"I think the responses that we have seen from countries so far has been measured," Mr Morrison told reporters in Canberra.

"Australia would continue to respect a two-state outcome that remained our goal as strongly as ever."

Israel's embassy in Canberra on Sunday said the decision was the right move. “Israel views the decision of the Australian government to open its Trade and Defence office in Jerusalem as a step in the right direction,” the Israeli Foreign Ministry said in a statement.

Both Israel and the Palestinians claim Jerusalem as their capital.

“The policies of this Australian administration have done nothing to advance the two-state solution,” Mr Erekat said in a statement. “All of Jerusalem remains a final status issue for negotiations, while East Jerusalem, under international law, is an integral part of the occupied Palestinian territory.”

In a statement, he said it was “blatantly biased towards the positions and policies of the Israeli occupation”.

Most foreign nations avoided moving embassies there to prevent inflaming peace talks on the city's final status - until Mr Trump unilaterally moved the US embassy earlier this year.

Mr Morrison's embattled coalition slipped into a minority government after losing the Sydney by-election in October, which followed the Liberal party's ousting of the local member and then prime minister Malcolm Turnbull.

The status of Jerusalem, home to sites holy to the Muslim, Jewish and Christian faiths, is one of the biggest obstacles to a peace agreement between Israel and Palestinians who want East Jerusalem recognised as the capital of a Palestinian state.

Israel regards all of Jerusalem as its capital, including the eastern sector that it annexed in a move not recognised internationally after the 1967 Middle East war.