Fish have become stranded in isolated pools in the Darling River amid a prolonged drought that has ravaged much of the sunburnt country's eastern interior.

Last summer, up to a million fish died in the same area of the river - part of the vast Murray-Darling Basin that is the lifeblood of Australia's food bowl.

Scientists said the deaths were caused by low water and oxygen levels as well as potentially toxic algae.

Now the government has begun an effort to relocate thousands of fish to healthier sections of the river or into hatcheries.

Up to 20 pools of fish will be moved downstream in the first stage of the relocation effort, which is expected to be rolled out across the drought-stricken state in the coming months.

Other fish will be removed from the river altogether, and placed into private and state-owned hatcheries until the water starts flowing again.

Some environmentalists have cast down on the efficacy of the A$10 million (S$9.4 million) plan, which the state government has dubbed a "modern-day Noah's Ark". 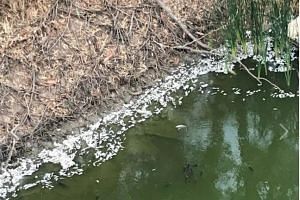 But Mr Marshall defended it as "providing the best possible chance of survival" for the fish - while also admitting there will almost certainly be further severe fish kill events this summer.

"With record low rainfall and high temperatures predicted over the coming months, this action will help protect our iconic species in the midst of the worst drought on record," he said.

The health of the Murray-Darling Basin - a river network stretching across one million square kilometres, about twice the size of Spain - has been the subject of intense debate in Australia for years.

Experts and locals say the systemic depletion and pollution of the river is to blame for its poor condition.

In January, a Royal Commission report accused the authority responsible for oversight of the basin of failing to be guided by environmental priorities and ignoring climate change projections.

The body was accused of allowing politics to determine how much water could be removed from the river to irrigate farmland.