WELLINGTON (AFP) - New Zealand will crack down on firearms ownership this week after the Christchurch mosques massacre that claimed 50 lives - and the Kiwi gun lobby, for the most part, is okay with that.

In stark contrast to the United States, where even the most minor curbs on gun ownership meet ferocious opposition led by the National Rifle Association, New Zealand gun owners agree action is needed.

The March 15 rampage by a white supremacist gunman has been a shock to the collective system.

"We want to support our government in any changes to prevent a terrorist attack from happening in New Zealand again," Ms Nicole McKee, secretary of the Council of Licensed Firearm Owners said.

Prime Minister Jacinda Ardern's government announced an immediate ban on military-style semi-automatic rifles (MSSAs) after the shooting and will put laws to Parliament formalising its action on Tuesday (April 2).

Finalising such legislation can often take months but Ms Ardern says the matter is so urgent it will be done by April 11.

Further curbs - potentially including a gun register, tighter vetting and stricter gun storage rules - are set to be passed by the end of the year.

In a move that would be unthinkable in the US, one of New Zealand's largest gun retailers, Hunting & Fishing, voluntarily stopped selling MSSAs and halted online firearms sales.

"Such weapons of war have no place in our business - or our country," chief executive Darren Jacobs said.

New Zealand has its own National Rifle Association, but since the shooting, it has been at pains to point out it is a small sporting organisation, not a wealthy political lobby group like its American counterpart.

Another office holder has told media the New Zealand NRA is considering changing its name to avoid any association with the American body.

On the surface, New Zealand and the US share many historical similarities, but they have a fundamentally different attitude towards firearms.

Both are former British colonies that fought bitter wars against indigenous populations and forged an individualistic frontier mentality.

However, statistics highlight the difference.

In 2016, New Zealand, with a population of about 4.7 million, had nine firearms-related homicides.

In the United States, with a population of approximately 327 million, there were 14,415 - more than 200 times the per capita rate as New Zealand. 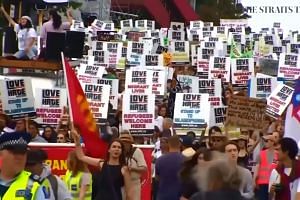 Solidarity amid tears at vigil for New Zealand attack victims

A PRIVILEGE OR A RIGHT?

There are approximately 393 million guns in private hands in the US, or 1.2 for every person, whereas New Zealand has about 1.5 million, or 0.3 per person.

The New Zealand government believes there are 13,500 MSSAs in the country, while estimates put the number in the US at 15 million.

Mr Philip Alperts, a gun policy researcher at the University of Sydney, said the crucial difference between New Zealand and the US is the US Constitution's Second Amendment, which guarantees the right to keep and bear arms.

Mr Alperts, himself a Kiwi, said countries such as New Zealand viewed gun ownership as a privilege, while in America it is seen as an inalienable right.

"We have a population who, when they travelled to America would get off the plane and be absolutely horrified to see people walking around with a gun," he said, adding that safety was at the centre of New Zealand gun culture.

Journalist Dawn Picken covered scores of shooting deaths in the US and once had bullets lodged in her bedroom when a random gunman opened fire on her apartment building in Spokane, Washington state.

She said she had found a different mindset since moving to New Zealand in 2011.

"It was quite refreshing as an American to come here and hear Kiwis who own guns say 'I don't think they should be easy to get and it's not my right, they should check I'm not predisposed to violence or going to go off the rails,'" she said. 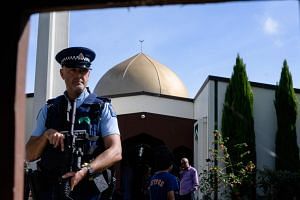 However, like anywhere, New Zealand has a vocal fringe element.

But former police minister Judith Collins had a blunt message for the US NRA and any other gun lobbyists who tried to inject themselves into New Zealand's gun control debate: "Bugger off."

The difference in gun cultures has played out on social media since the Christchurch shooting.

When a right-wing US website tweeted that "armed government thugs" were carrying out door-to-door gun confiscations in New Zealand, dozens of Kiwis left mocking replies.

"I had a self-saucing dessert in my pantry," said one. "The cops came for it in the dead of night - apparently we aren't allowed semi-automatic trifles."