MELBOURNE/SYDNEY (REUTERS) - Some New Zealand companies are weighing whether to advertise on social media, as two industry groups urged them not to in the wake of last week's mass shooting in Christchurch that were live streamed on Facebook and redistributed on other platforms.

Fifty people were killed and dozens wounded in the shootings at two mosques in Christchurch last Friday (March 15). Australian Brenton Harrison Tarrant, 28, a suspected white supremacist, was charged with murder the next day.

State-owned Lotto NZ said it had already pulled advertising from social media, "as the tone didn't feel right in the aftermath of these events".

"Like the rest of the country, Lotto NZ is shocked and saddened by the tragic events that occurred in Christchurch on Friday," Lotto NZ spokeswoman Kirsten Robinson said in e-mailed comments.

ASB Bank, one of the country's biggest banks and a unit of Commonwealth Bank of Australia, is in talks on whether to pull its ads from social media, a spokesman said.

The Association of New Zealand Advertisers and the Commercial Communications Council asked all advertisers on Monday to consider where they place their ads, and challenged Facebook and other platform owners to take steps to moderate hate content.

"Businesses are already asking if they wish to be associated with social media platforms unable or unwilling to take responsibility for content on those sites," the two groups said in a joint statement. 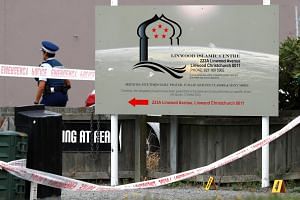 "The events in Christchurch raise the question, if the site owners can target consumers with advertising in micro-seconds, why can't the same technology be applied to prevent this kind of content being streamed live?"

Facebook said last Saturday that it removed 1.5 million videos globally of the attack in the first 24 hours after the attack and is removing all edited versions of the video that do not show graphic content.

New Zealand's biggest telecommunications company, Spark NZ, worked with a number of broadband providers late last Friday to cut off access to dozens of websites that were redistributing the video of the killings, to stop it spreading.

"This is a pretty extreme step. We've never done this before," said Spark spokesman Andrew Pirie. He declined to name websites that had been blocked, saying the list was evolving.

Spark did not bar access to Facebook, as many customers were depending on it to contact friends and family after the massacre, Mr Pirie said. The company is not considering pulling advertising from any social media, he said.