CANBERRA (BLOOMBERG) - Melbourne-based public health student Edwin Kwong is thousands of miles from Hong Kong, but he said his life has changed since his hometown descended into near-constant protest 11 weeks ago.

Mr Kwong now avoids contentious political talk at his university because he is worried it will make him a target for Mandarin-speaking students from the mainland. And after he attended a rally on campus last week, photos of his fellow pro-democracy protesters at another Melbourne campus were posted on a WeChat group that supports Beijing's rule, identifying them as "poisonous" separatists.

"It's pretty dark," Mr Kwong said, noting he was also followed and photographed while at the rally. His concerns show the heated tensions that have erupted in Hong Kong are also bubbling away among an increasingly fractured Chinese diaspora.

Pro-democracy protests are planned in four Australian cities on Friday evening (Aug 16), launching a weekend of global protests that will include vigils in the United States, Europe, Canada and Japan under the banner "Global Solidarity With Hong Kong". Meanwhile, pro-China rallies are being organised in Sydney, where boards hosting messages in support of independence campaigners have been vandalised.

So far, the violent scenes that have played out almost daily in Hong Kong - fuelling anxiety over the possibility of military intervention by Chinese President Xi Jinping - have been avoided elsewhere. Yet heated exchanges on university campuses in Australia, New Zealand and Canada have led to accusations that Beijing may be attempting to stoke nationalist sentiment beyond its borders.

"A lot of people from mainland China who live abroad, including students, are angry about what's going on in Hong Kong, and it's not surprising they're clashing with pro-democracy supporters," said Mr Ben Bland, a director at Sydney-based think tank the Lowy Institute and author of Generation HK: Seeking Identity In China's Shadow.

"If the situation in Hong Kong continues to get more heated, it will inevitably get more difficult for universities and governments to manage those tensions."

At a university campus in Brisbane last month, protesters from both sides hurled verbal abuse at each other and punches were thrown. After China's consul general in Brisbane, Mr Xu Jie, stated his support of "the spontaneous patriotic behaviour of Chinese students", Australian Foreign Minister Marise Payne warned that overseas diplomats shouldn't encourage "disruptive or potentially violent behaviour".

A similar scenario played out in New Zealand. After pro-Beijing students clashed with supporters of the Hong Kong protesters at the University of Auckland, the Chinese consulate said pro-democracy demonstrators were "demonising the images of China" and "inciting anti-China sentiment".

The Auckland campus has also seen vandals deface its "Lennon Wall", a local version of the pro-democracy message boards that have popped up all over Hong Kong. Sydney's version in the central business district has been removed. 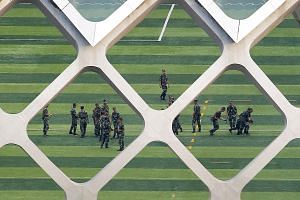 Beijing will not sit by and watch if Hong Kong crisis worsens: Chinese envoy

At Vancouver's Simon Fraser University, attacks on its Lennon Wall have seen activists create a mobile billboard that's monitored by day and rolled away at night, Ms Sylvia Ceacero, the student society's executive director, said by phone on Wednesday.

Tensions among the diaspora have increased in recent years in Vancouver, a city where one in five have Chinese heritage. There are divisions between the Cantonese-speaking population - many of whom fled Hong Kong ahead of the 1997 handover from Britain to China - and the mainland-based, predominantly Mandarin-speaking migrants and students who have more recently arrived.

Hong Kong's now-suspended extradition Bill, which sparked the city's protests, isn't an abstract threat for many Canadians. An estimated 300,000 Hong Kong residents hold Canadian citizenship - a survey in 2011 showed that nearly 8 per cent of Hong Kong households have at least one Canadian citizen over the age of 18.

The prospect that such Canadians could potentially be handed over to China has prompted alarm, especially given the fate of two Canadians presently in Beijing's custody. Michael Kovrig and Michael Spavor have spent eight months in a jail with only a handful of consular visits, their detention widely seen as a tit-for-tat reprisal for Canada's arrest of a Huawei Technologies Co executive on a US extradition request.

Huawei has also sat at the centre of controversy in Australia, with Beijing angered after the government banned the state-linked company from building its 5G network.

Australia, the most China-dependent developed economy and a key ally of the US, last year legislated anti-foreign interference laws designed to restrict Beijing's meddling in its government, media and universities. Australia hosts more than 250,000 Chinese students, who make up about 29 per cent of the total international-student intake in an industry that reaped almost US$24 billion (S$33.3 billion) last year.

The Communist Party's United Front - a collection of affiliated parties and overseas influence groups - has been accused of seeking to sway public opinion in Australia. Meanwhile, the Sydney Morning Herald reported this month that a China-based mother of one of the protesters who attended the Brisbane rally received a warning from officials that her son shouldn't engage in "anti-China rhetoric".

Ms Jane Golley, an economist and director of the Australian National University's Australian Centre on China in the World in Canberra, said that while it was evident that the tensions in Hong Kong had spread globally, the right to protest remained fundamental for Western universities.

"There are bigger things to be concerned about than a number of Chinese students protesting at Australian universities," Ms Golley said, adding that the Brisbane student's report of being warned through his mother was a "repression of freedom that makes me nervous".