SYDNEY (REUTERS) - Australian Radomir Kobryn-Coletti has no commitment to any political party, right or left, but his job right now is churning out incendiary Facebook memes for a controversial senator, wooing the far-right ahead of this month's elections.

"There's tight competition for the alternative right-wing vote," said Mr Kobryn-Coletti, 23, who works for Queensland Senator Fraser Anning, frequently posting on his smartphone from his bed, from the beach, waiting for a plane or stuck in traffic.

"For your political candidate to win, you have to energise the base, and you don't energise the base with corporatised, clean, sanitary content. It's what will get the maximum of attention."

With at least six far-right groups with limited funding vying for what political analysts believe is one available Senate seat in the largely rural state of Queensland, victory in the May 18 election is down to who can get the most eyeballs for the least money.

There are 76 Senate seats nationwide but whoever wins a seat as an independent gets outsize influence, given neither of the mainstream parties, the ruling Liberal-National coalition and opposition Labor, is expected to win the 38 needed for outright control of the Upper House.

"Facebook is definitely the go-to for these groups to easily spread their message to a potentially large audience," said Mr Jordan McSwiney, a researcher at University of Sydney's Department of Government and International Relations who specialises in far-right politics. 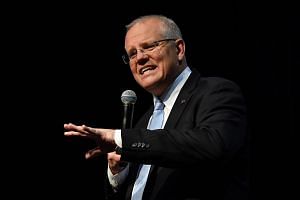 Australia’s election race heats up as Morrison fights back

"The cost of a coordinated meme campaign on Facebook is dramatically cheaper than other forms of advertising."

In a recent Facebook posting, Mr Kobryn-Coletti declared "White South Africans are being murdered, tortured and kicked off their land, yet the left remains completely silent", with a photo of a black man holding a sign saying "kill all whites".

Senator Anning would "ensure our Boer brethren get emergency visas", the post added.

Australian fringe politics is not confined to hardline conservatives, but anti-immigration sentiment has surged since two hostages were killed during a 17-hour siege by a "lone wolf" gunman, inspired by Islamic State in Iraq and Syria (ISIS) militants, in a Sydney cafe in 2014.

Right-wing groups used Facebook to communicate and organise - until March 15, when 50 people at two New Zealand mosques were shot dead. Facebook swiftly deleted dozens of anti-immigration pages, but not those of politicians.

A suspected white supremacist has been charged with 50 counts of murder and will next appear in court in June.

"Unless there's some sort of violence inherent in the (post), for the most part (social media companies) toe this sort of conservative line, 'don't stir up too much trouble by banning an elected official'," said Mr Joshua Roose, a political sociologist at Australian Catholic University who advises the federal government on violent extremism.

A Facebook spokesman said the company applied its community standards to politicians and other public figures but "at times we will allow content that might otherwise violate our standards if we identify that it is newsworthy, significant, or important to the public interest".

"We do this only after weighing the public interest value of the content against the risk of real-world harm," he said.

Facebook has removed certain posts on Mr Anning's page, and even taken down the page itself temporarily, according to Mr Kobryn-Coletti.

Mr Kobryn-Coletti's output has seen his client's Facebook following explode to 130,000 - he got 19 direct votes at the 2016 election and assumed office only when another senator left mid-term - but most analysts believe Mr Anning will lose his seat because of a coordinated effort by rival parties to urge voters to direct ballot preferences away from him. 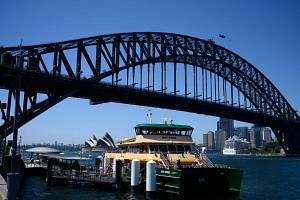 Aussies to go to the ballot box on May 18

Under Australia's complicated voting system, if no candidate gets more than half the primary vote, the candidate who comes last is removed from the ballot and voting starts again, with voters' next preference counted instead. This continues until a candidate gets a majority.

Adding to the challenge, Mr Anning's former party, One Nation, is running candidates for the Queensland Senate in the hope that two decades of name recognition will neutralise a series of scandals involving undercover footage taken by Al-Jazeera of its senior officials on a trip to Washington DC.

A recent poll showed One Nation's support falling but its lost votes would probably return to mainstream parties, said Mr Adrian Beaumont, an associate at University of Melbourne's School of Mathematics and Statistics.

"Greater polarisation between the major parties is drawing more voters back to them," Mr Beaumont said.

Mr Kobryn-Coletti, who learned his craft by studying the social media activity of United States President Donald Trump before the 2016 election, meanwhile said he would consider working for other parties after the election, including the Greens and Labor, if he agreed on an issue.