Australian Prime Minister Scott Morrison yesterday called an election for May 18, clearing the way for a battle that is likely to centre on the economy, wages and climate change.

The election will pit Mr Morrison, the head of the ruling Liberal-National Coalition, against Labor leader Bill Shorten, whose party has long enjoyed a solid lead in opinion surveys and entered the 37-day campaign as the favourite.

The opening shots from both sides yesterday signalled that the major parties will play to their perceived strengths. The Coalition insisted it was the better economic manager, while Labor insisted it would deliver "fairer" wages and services.

Mr Morrison, who has been leader for less than eight months, yesterday reiterated that voters can trust the Liberal-National Coalition to deliver a stronger economy.

He called the election just a week after delivering a federal budget that promised to return a surplus next year - for the first time in more than a decade.

"The choice to be made by Australians on the 18th of May is… who do you trust to deliver that strong economy which your essential services rely on?" he told reporters.

Mr Shorten insisted Labor was committed to a fairer, more progressive Australia. He pledged to address the country's stagnant wages and to do more to tackle climate change, painting the Coalition as tired and out of touch.

"Do you want Labor's energy, versus the government's tiredness?" he said. "Labor's focus on the future, versus being stuck in the past?"

Mr Morrison enters the campaign as the firm underdog, with opinion surveys showing the ruling Coalition consistently trailing Labor since the last election in 2016.

The Coalition has ruled since 2013 but has suffered from infighting that led to the toppling of successive leaders: Mr Tony Abbott in 2015, followed by his successor, Mr Malcolm Turnbull, who was deposed last August. Much of the disunity has stemmed from a failure to agree on climate-change policy, which has resulted in the Coalition failing to provide a coherent or consistent plan for cutting carbon emissions.

The most recent Newspoll survey, published on Monday, showed Labor leading the Coalition by 52 per cent to 48 per cent. This was the best result for the Coalition since Mr Morrison became leader, suggesting that it had received a bump in support after last week's budget.

The Coalition starts off with 73 seats in the 151-member Lower House, compared with 72 for Labor.

The remaining six are either independents or minor party MPs.

This means both the Coalition and Labor will need to gain seats to ensure a parliamentary majority.

Australia has enjoyed a world-record 27-plus years of consecutive economic growth, fuelled by Chinese demand for Australian commodities. But wages have been stagnant and the property market has begun to fall dramatically, especially in Sydney and Melbourne.

Mr Shorten has pledged to lift incomes for those on low pay, saying the election will be a referendum on wages. He also wants to wind back tax incentives for investors in property and assets - a move that will add billions of dollars to government coffers and has enabled him to promise extra spending on health and education. 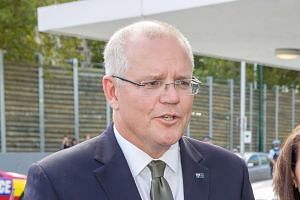 But the Coalition says the move risks further weakening the ailing property market.

Political historian Frank Bongiorno, from the Australian National University, said the ballot comes amid a slowing economy, describing it as "Australia's first post-GFC (global financial crisis) election". He said voters were increasingly concerned with rising inequality and "what they see as the greed and amorality of big business and big government".

"In line with global developments, for the foreseeable future we are likely to experience lower rates of economic growth than those to which we have been accustomed," he wrote on The Conversation website.

"Australian voters... are concerned about their flat wages and rising cost of living. They demand that governments make the wealthy contribute a fair share."

Mr Shorten, 51, a former union leader, presents himself as a champion of hard-working families.

Despite his low approval ratings, Mr Shorten has led Labor for six years and - unlike Mr Morrison - is able to portray himself as head of a united "team".

Australia has compulsory voting, meaning that parties tend to pitch their messages at the electoral centre. But the election will ultimately turn on a series of tightly fought seats, where victory can often hinge on local issues and candidates.

Things to know about the polls

CANBERRA • Here are some facts on how elections work in Australia:

• Australia does not have a set date for national elections, but the maximum term between polls is three years. The election is called by the prime minister.

• There are two Houses of Parliament, with the government formed by the party or coalition with a majority in the Lower Chamber, or House of Representatives.

• The new Parliament will increase to 151 seats following a review of electoral boundaries and population changes. Victoria and the Australian Capital Territory each gained a seat, while South Australia lost one seat.

• The prime minister is chosen by the governing party from the House of Representatives.

• The Upper House Senate has 76 members - 12 from each of the six states and two from each of Australia's two less populous territories.

• State senators are elected for six-year terms, while territory senators are elected for three years. Half the Senate is up for election at each national poll, except in rare cases when Parliament is deadlocked and the entire Upper House is dissolved. Australia has a preferential voting system for elections to the Lower House, with voters marking their ballot papers "1, 2, 3 ..." in order of preference.

• A candidate who gets more than 50 per cent of the total first-preference votes wins the seat. If no candidate reaches that threshold, the one with the fewest votes is excluded and their votes are distributed to the person nominated as the second preference. This continues until one candidate passes the 50 per cent threshold.

• Since 2010, there has been a high turnover of prime ministers in Australia, where the governing party can call a leadership vote without involving the electorate.

• No prime minister has served a full term in office since a John Howard-led coalition was voted out in 2007 after 11 years in power.

A version of this article appeared in the print edition of The Straits Times on April 12, 2019, with the headline 'Aussies to go to the ballot box on May 18'. Subscribe
Topics:
More
Whatsapp Linkedin FB Messenger Telegram Reddit WeChat Pinterest Print Purchase Article Copy permalink