Anning has received widespread condemnation following comments he made that saying cause of New Zealand's worst peace time shooting was letting "Muslim fanatics" migrate to the country.

The text of a bipartisan motion, led by Senate leader Mathias Cormann and Senate opposition leader Penny Wong, said Anning seeks “to attribute blame to victims of a horrific crime and to vilify people on the basis of religion, which do not reflect the opinions of the Australian Senate or the Australian people.”

The motion will move when the Senate returns in April.

The controversial senator has been under fire since his comments on Friday that came just hours after the massacre, including calling Islam “the religious equivalent of fascism.” He was egged by a teenager while speaking to reporters on Saturday.

"(Anning's) conflation of this horrendous terrorist attack with issues of immigration, in his attack on Islamic faith specifically, these comments are appalling and they're ugly and they have no place in Australia," Australia's Prime Minister Morrison told journalists on Saturday.

Footage of the incident, shared widely on social media, showed Senator Fraser Anning being approached from behind at a political event on Saturday, before having an egg cracked on the back of his head.

The footage showed Anning appearing to try to hit the person, before that person was dragged to the ground.

Victoria Police released a statement saying the incident was being investigated "in its entirety" and that it involved a 17-year-old boy. 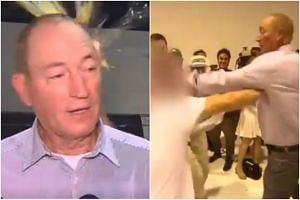 A GoFundMe campaign had raised more than A$19,000 (S$18,200) for the teenager to cover the cost of legal fees and so he could "buy more eggs" by Sunday and the hashtag #EggBoy was trending on Twitter.

Meanwhile, Australia's immigration minister announced on Saturday that controversial conservative speaker Milo Yiannopoulos would not be allowed to enter Australia following Yiannopoulos describing Islam as a "barbaric" and "alien" religion.

"Mr Yiannopoulos' comments on social media regarding the Christchurch terror attack are appalling and foment hatred and division," immigration minister David Coleman said in a statement.

Australian Brenton Harrison Tarrant, 28, a suspected white supremacist, was charged with murder on Saturday after 49 people were killed and dozens wounded in mass shootings at two New Zealand mosques.