BRASILIA/RIO DE JANEIRO • The coronavirus is surging "dangerously" across Brazil, the World Health Organisation's (WHO) regional director for the Americas, Dr Carissa Etienne, warned on Tuesday, urging all Brazilians to take preventive measures to stop the spread.

Covid-19 cases have risen in Venezuela's Bolivar and Amazonas states, and in border regions of Peru and Bolivia, she said.

On Tuesday, Brazil suffered a record 3,251 Covid-19 deaths, as pot-banging protests erupted across the country during an address by President Jair Bolsonaro in which he defended his pandemic response and pledged to ramp up vaccinations.

The new record number of daily deaths underlines the scale of Brazil's outbreak, which is spiralling out of control thanks to a lumpy vaccine roll-out and a messy patchwork of public health restrictions that are pushing the country's hospitals to the breaking point.

The virus variant first discovered in Brazil, known as P1, which experts say is more contagious than the original coronavirus strain, has now been detected in 15 countries in the Americas and become a major cause for concern, said Paho incident manager Sylvain Aldighieri.

In the Southern Cone, Covid-19 cases continue to spike in Chile, Paraguay and Uruguay, according to Paho.

In Paraguay, a majority of intensive care unit (ICU) beds are occupied and the health system is buckling under the pressure.

Uruguay has reported more than 1,000 cases per day several times in the past few weeks, an alarming number given the size of the country.

In Central America, cases have declined in Panama, but the rise in hospitalisations in Guatemala is straining ICU bed capacity.

The Covax facility led by the WHO and the Gavi vaccine coalition to provide equitable access to vaccines has delivered 2,161,800 doses to the region so far, including more than one million doses to Brazil last weekend. 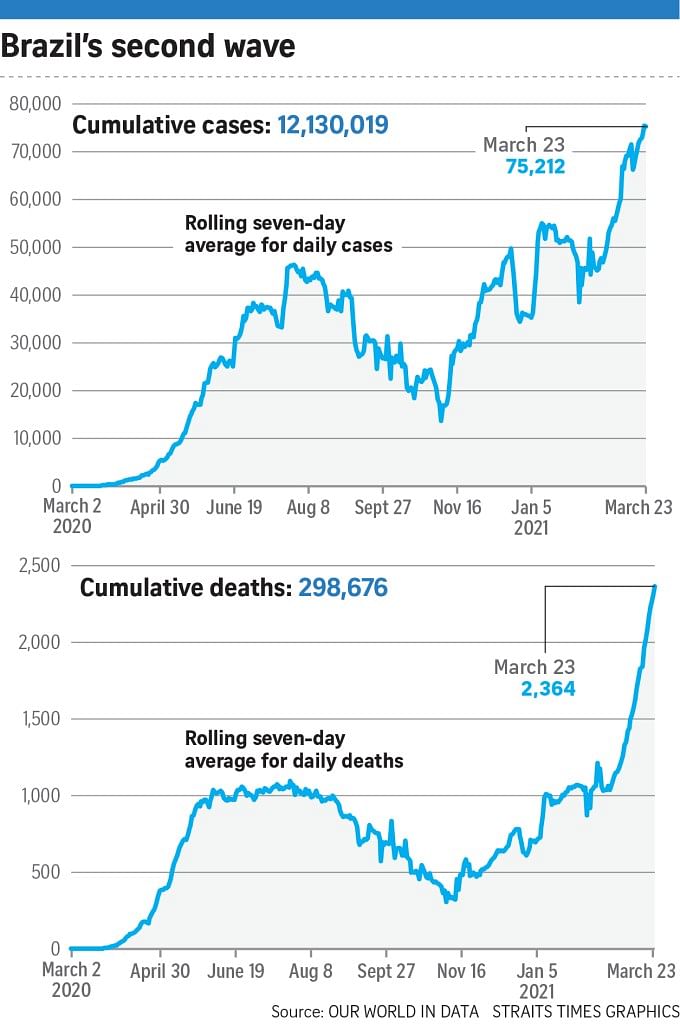 Paho expects over 100,000 vaccine doses to be delivered this week to El Salvador, Belize and Suriname, and 1.2 million additional doses have already been procured.

"Vaccines are coming but they are still several months away for most people in our region," said Dr Etienne.

According to a Reuters tally, Latin America and the Caribbean have recorded around 23.7 million coronavirus cases so far and 746,000 related deaths, almost double the toll of Asia and Africa combined.

Earlier this month, Brazil surpassed India in coronavirus infections, retaking the post of second-hardest-hit country in the world. It trails the United States in deaths and infections globally.

Mr Bolsonaro is under mounting pressure to control the outbreak, after repeatedly playing down the virus, sowing doubts about vaccines and fighting state and local lockdown measures.

In his brief televised address on Tuesday, he said his government had never failed to adopt measures to combat the pandemic and said he would make 2021 the year of vaccinations.

However, in cities across Brazil, loud pot-banging protests echoed through the night as many voiced their anger at his handling of the outbreak.

Earlier on Tuesday, Mr Bolso-naro swore in cardiologist Marcelo Queiroga as his fourth health minister since the pandemic began.

A version of this article appeared in the print edition of The Straits Times on March 25, 2021, with the headline 'WHO warns of 'dangerous' coronavirus surge in Brazil'. Subscribe
Topics:
More
Whatsapp Linkedin FB Messenger Telegram Reddit WeChat Pinterest Print Purchase Article Copy permalink