Two male suicide bombers carried out the devastating twin bombings in Ankara on Saturday (Oct 10), the deadliest attacks in the history of Turkey.

The government put the official toll at 97 people dead and more than 500 injured.

Though initial investigations were reportedly focusing on the Islamic State in Iraq and Syria, media reports had identified others who may be behind the attacks.

Here's a quick look at who's on the suspect list:

The Turkish government blamed ISIS for a suicide bombing against peace activists on July 20 in the town of Suruc on the Syrian border that left 33 people dead. ISIS seized swathes of neighbouring Iraq and Syria, and Turkey was long criticised by its Nato partners for not doing enough to crack down on the group. But now, it has fully joined a US-led coalition fighting ISIS and has allowed US warplanes to use its key southern base at Incirlik, raising fears that Turkey could be vulnerable to revenge attacks by the militant group. 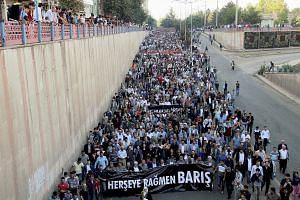 NTV television said the initial investigation of the Ankara attacks pointed to a connection to ISIS. It said experts believed that the type of bomb used was very similar to the Suruc attack and the same Turkish forensic team in Suruc were now working in Ankara.

The Hurriyet and Haberturk dailies reported that the elder brother of Abdurrahman Alagoz, who carried out the Suruc bombing, could be implicated in the Ankara blasts.

Turkish police had arrested 43 suspected members of ISIS in raids across the country in cities including Adana and Antalya, but there was no suggestion yet of any link to the Ankara attacks.

The group, which has Marxist-Leninist roots, was formed in the late 1970s and launched an armed struggle against the Turkish government in 1984, calling for an independent Kurdish state within Turkey. Since then, more than 40,000 people have died. The Turkish government, the European Union and the United States have designated the PKK and related groups as "terrorist organisations".

The PKK on Saturday unexpectedly announced it would suspend all attacks - except in self defence - ahead of the snap elections on Nov 1. The annoucement came hours after the Ankara attacks. But the Turkish army kept up its campaign with more air raids on southeast Turkey and northern Iraq, killing 49 suspected militants.

The extreme-left Revolutionary People's Liberation Party-Front (DHKP-C) has waged a violent campaign for more than three decades. The DHKP-C, known until the mid-1990s as Devrimci Sol (Revolutionary Left), seeks a Marxist revolution in Turkey among the working classes but also espouses a fiercely anti-Western and anti-Nato agenda.

It has claimed a string of attacks in Turkey, including a gun attack on the US embassy in Istanbul on Aug 10 by two women. It also claimed the hostage-taking on March 31 of prosecutor Mehmet Selim Kiraz at his Istanbul office that ended with the killing of the captive and both hostage-takers during a police raid. But most attacks have been small in scale and sometimes even amateurish in nature.

The leader of the pro-Kurdish Peoples' Democratic Party (HDP) Selahattin Demirtas blamed a "mafia state" and a "state mentality which acts like a serial killer" for the attack. With tensions high ahead of the Nov 1 snap elections, the HDP fears the government will try to benefit from the unrest at the ballot box.

Many Turks are fearful of acts that the secret security services - known as the "deep state" (derin devlet in Turkish) - could commit. However the government angrily ridiculed the notion of any state involvement.