NEW YORK (BLOOMBERG) - When will the pandemic end? It's the question hanging over just about everything since Covid-19 took over the world last year. The answer can be measured in vaccinations.

Bloomberg has built the biggest database of Covid-19 shots given around the world, with more than 119 million doses administered worldwide.

US experts like Dr Anthony Fauci have suggested it will take 70 per cent to 85 per cent coverage of the population for things to return to normal.

Bloomberg's Vaccine Tracker shows that some countries are making far more rapid progress than others, using 75 per cent coverage with a two-dose vaccine as a target.

With vaccine manufacturers scaling up production, more people will be vaccinated in a shorter time.

Israel, the country with the highest vaccination rate in the world currently, is headed for 75 per cent coverage in just two months. The US will get there just in time to ring in the 2022 New Year (though North Dakota could get there six months sooner than Texas).

With vaccinations happening more rapidly in richer Western countries than the rest of the globe, it will take the world as a whole seven years at the current pace.

Bloomberg's calculator provides a snapshot in time, designed to put today's vaccination rates into perspective. It uses the most recent rolling average of vaccinations, which means that as vaccination numbers pick up, the time needed to hit the 75 per cent threshold will fall. The calculations will be volatile, especially in the early days of the roll-out, and the numbers can be distorted by temporary disruptions.

For example, New York's target date was briefly pushed out to 17 months this week after a winter blizzard prevented some from getting vaccinated (it's now back down to 13 months). Likewise, Canada's vaccination rate dropped by half in recent weeks following reports of delayed vaccine shipments.

Based on Canada's latest rate of inoculations it would take more than 10 years to reach 75 per cent coverage. That might serve as a wake-up call to Canadian politicians and health officials, but it doesn't mean the country is doomed to a decade of social distancing.

Canada has contracts to buy more vaccine doses per person than any other country, and its vaccination rates are expected to climb. The pace is likely to accelerate further as more vaccines become available. Some of the world's biggest vaccine-manufacturing hubs in India and Mexico are only just getting started.

China, on the other hand, will take 5.5 years to cover its mammoth population, even though it is administering over a million vaccine doses a day.

The situation is more grim in countries like India, Indonesia and Russia, which are likely to take over 10 years to inoculate their populations if they continue at the current pace of vaccinations.

More than 8.5 billion doses of vaccine have been contracted by countries through more than 100 agreements tracked by Bloomberg. Only a third of countries have even begun their vaccination campaigns.

Vaccinations protect people against Covid-19 within a few weeks of getting the shots. But if just a few people in a community get vaccinated, the virus can continue to spread unchecked.

As more people get the vaccine, groups of people start to build a collective defence against the virus so that isolated sparks of infection burn out instead of spreading into an outbreak.

The concept is known as herd immunity. In the scientific community, there are conflicting definitions for when herd immunity is achieved.

Is it when enough people are protected that it begins to have a measurable effect on the speed of transmission? That could begin well before 75 per cent of people are fully vaccinated.

Others define it as the point when outbreaks can no longer be sustained. For example, even if there's a cluster of measles cases in an unvaccinated community, herd immunity prevents it from rippling across a country.

Brace yourself: Long-haul travel may not get going until 2023

How we run the numbers

The vaccines available today require two doses for full vaccination. Our calculations for coverage are based on two doses per person in the population but don't distinguish between first doses or second doses administered.

Those breakdowns can distort daily vaccination rates and aren't available in more than 20 per cent of the countries we're tracking.

A new vaccine by Johnson & Johnson recently showed positive results using a single dose in a large clinical trial. If approved, we'll adjust the number of doses required proportionate to its market share in each country.

The vaccines haven't been authorised for use in children - those studies are currently underway. Our calculator, like the virus, includes children in the population needed to be protected.

One metric Bloomberg's calculator doesn't account for is any level of natural immunity that might result from recovering from Covid-19. It's possible that hard-hit places might require a lower level of vaccination to prevent widespread transmission.

While there's evidence that people who recover from illness do retain some level of natural defences, it's unclear how much protection is offered or how long it might last.

The vaccine is still recommended for people who have recovered from illness. The calculator is the latest feature from Bloomberg's Covid-19 Tracker. The projections are updated daily and are based on the average daily vaccinations in data gathered from 67 countries and the US states and territories.

Countries may be excluded when they are in the earliest stages of vaccinations or if they provide infrequent updates on their vaccination numbers. 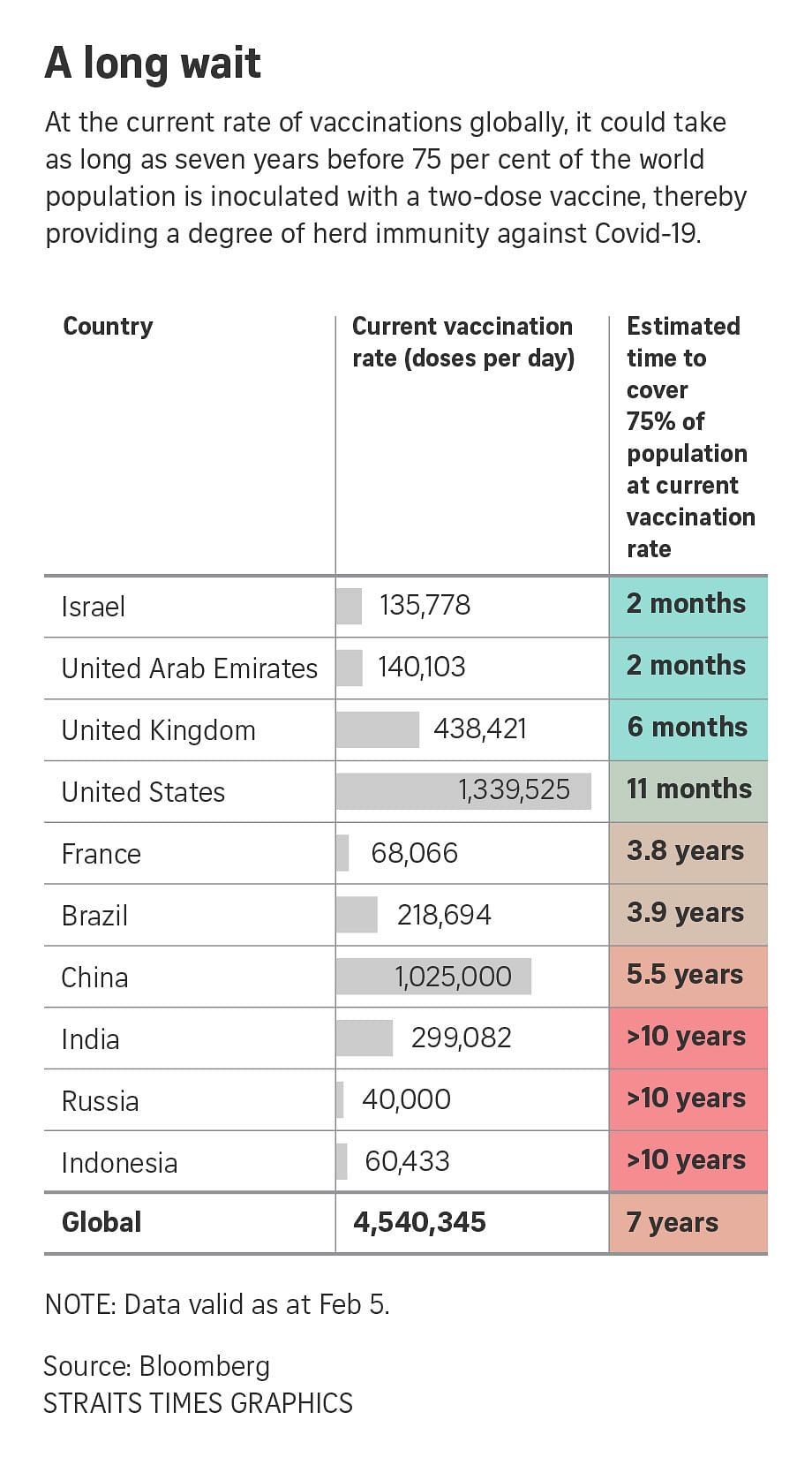