Here's what you need to know about rare-earth metals:

WHAT ARE RARE-EARTH ELEMENTS?

Despite their name, these elements are actually plentiful in the Earth's crust, with the exception of the radioactive promethium.

However, because of their geochemical properties, these elements are typically not found in large concentrations, as a result of which economically exploitable deposits are less common.

WHERE ARE THEY FOUND? 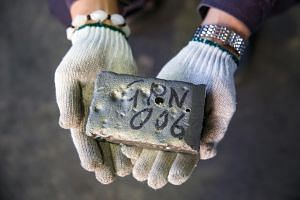 Today, China is the largest producer, accounting for 81 per cent of the world's rare-earth supply, mostly in Inner Mongolia, even though it has only 36.7 per cent of reserves. It is followed by Australia, which accounted for 15 per cent of production in 2017.

WHAT ARE THEY USED FOR?

Rare-earth uses have expanded over the years, and include the production of high-performance magnets, catalysts, alloys, glasses, and electronics.

Rare-earths like Ce and La are important catalysts used for petroleum refining and diesel additives.

The elements have also been used in agriculture to increase plant growth, productivity, and stress resistance seemingly without negative effects for human and animal consumption.