US President Donald Trump and Chinese Vice-Premier Liu He signed a long-awaited trade deal yesterday, calling a truce on their 1½-year-long trade war.

The phase one trade accord is an uneasy compromise between the world's two largest economies, whose sabre-rattling and tit-for-tat tariffs have rattled global markets and battered businesses caught in the crossfire since July 2018.

"Today we take a momentous step, one that has never been taken before with China, towards a future of fair and reciprocal trade... Together we are righting the wrongs of the past," said Mr Trump before the signing ceremony at the White House, adding that he will be visiting China soon.

The deal commits Beijing to structural reforms and large purchases of American goods and services, in exchange for Washington relaxing some tariffs on Chinese goods.

The US is expected to keep tariffs on about US$370 billion (S$499 billion) worth of Chinese goods until the deal's next phase.

Negotiations on this second phase, which will address thornier issues like China's state subsidies to domestic firms, will begin immediately but may end only after the US election in November, Mr Trump said last week.

Said US Vice-President Mike Pence before the ceremony: "We recognise that differences will remain between our two nations, but today is the start of a new chapter in trade relations between the two largest economies in the world."

US Trade Representative Robert Lighthizer said a day before the signing that all aspects of the phase one trade deal would be made public, except for a confidential annex detailing the amounts worth of American goods and services that China will purchase.

The text of the agreement was not yet available at press time, but China agreed to beef up intellectual property protection, halt forced technology transfers and open its financial services market, the Office of the US Trade Representative had said last month. China would also buy an additional US$200 billion worth of US goods and services over the next two years, it had added.

This includes US$75 billion worth of manufactured goods, US$50 billion worth of energy supplies, and US$40 billion worth of services, said White House economic adviser Larry Kudlow yesterday. The US earlier said China would also buy additional US$32 billion in farm products over the next two years.

This target would be a massive - and to some sceptics, unrealistic - increase over the US$186 billion in goods and services China bought from America in 2017, before the start of the trade war.

Phase one deal, a win for Donald Trump | Asian Insider | The Straits Times

In return, the US agreed to halve 15 per cent tariffs on US$110 billion worth of goods in September to 7.5 per cent, and suspend fresh tariffs on US$160 billion in goods that were to have kicked in last month. 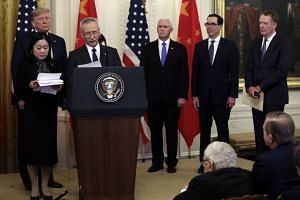 US-China phase one trade deal welcome, but is only a truce

Treasury Secretary Steven Mnuchin said before the signing that phase two of the deal would ease tariffs on Chinese imports even if the agreement was segmented into several rounds, giving China an incentive to continue to negotiate unresolved issues.

"This is an enormous win," he said. "The average consumer will see a stronger economy in 2020 thanks to this deal."

The signing allows Mr Trump, who campaigned to rebalance America's trade relationship with China and end unfair Chinese trade practices long resented by the US business community, to tout the deal as a victory in an election year.

"We've produced everything we've said and more. Before, it was talk. I said we're going to take care of your trade. What we've done with China now... you've got to love Trump," Mr Trump told a roaring crowd of supporters at a rally in Wisconsin on Tuesday night.

The trade deal has been criticised by Democrats and others as not going far enough to correct China's market-distorting trade practices.

Stocks rose yesterday morning in anticipation of the signing to hit new records. The Dow Jones Industrial Average rose 0.6 per cent, while the S&P 500 gained 0.4 per cent and the Nasdaq Composite advanced 0.5 per cent.