BEIJING/WASHINGTON (REUTERS) - The United States and China escalated their acrimonious trade war on Thursday (Aug 23), implementing punitive 25 per cent tariffs on US$16 billion (S$22 billion) worth of each other’s goods.

The latest round brings to US$50 billion the value of imports subjected to tariffs on either side since early July, and more are in the pipeline, adding to risks for global economic growth.

Washington will hold hearings this week on a proposed list of an additional US$200 billion worth of Chinese imports to face duties.

“China resolutely opposes this, and will continue to take necessary countermeasures,” it said in a brief statement shortly after mid-day.  “At the same time, to safeguard free trade and multilateral systems, and defend its own lawful interests, China will file suit regarding these tariff measures under the World Trade Organisation dispute resolution mechanism,” it said.

US Customs and Border Protection confirmed on its website that at 12.01am EDT (12.01pm Singapore time) on Thursday, which is just past noon in Beijing, it would begin collecting extra 25 per cent duties on 279 Chinese import products ranging from motorcycles to steam turbines and railway cars valued at US$16 billion.

China has said its own tariffs on a list of US$16 billion worth of imports from the United States, including coal, medical instruments, waste products, cars and buses, would be effective at 12.01pm local time.

The tariffs took effect amid two days of talks in Washington between mid-level officials from both sides, the first formal negotiations since US Commerce Secretary Wilbur Ross met Chinese economic adviser Liu He in Beijing in June.

However, Mr Trump on Monday told Reuters in an interview that he did not "anticipate much" from the talks led by US Treasury Under-Secretary David Malpass and Chinese Commerce Vice-Minister Wang Shouwen. 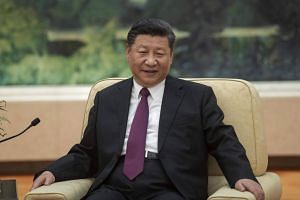 Economists reckon that every US$100 billion of imports affected by tariffs would reduce global trade by around 0.5 per cent.

They have assumed a direct impact on China's economic growth in 2018 of 0.1-0.3 percentage points, and somewhat less for the US, but the impact will be bigger next year, along with collateral damage for other countries and companies tied into China's global supply chains.

Mr Trump has threatened to impose duties on virtually all of the more than US$500 billion of Chinese goods exported annually to the US unless Beijing agrees to sweeping changes to its intellectual property practices, industrial subsidy programmes and tariff structure.

That would more than exceed the size of China's exports to the US, raising concerns that Beijing could consider other types of retaliation, such as making life more difficult for American firms in China or letting its yuan currency weaken further to keep its exports competitive.

Mr Trump's hard line has rattled Beijing and spurred criticism within Chinese policy circles over its handling of the trade war, sources have said.

Beijing has denied US allegations that it systematically forces the unfair transfer of US technology and has said that it adheres to WTO rules.

Washington's latest tariffs apply to products including semiconductors, plastics, chemicals and railway equipment that the Office of the US Trade Representative has said benefit from Beijing's "Made in China 2025" industrial plan to make China competitive in high-tech industries.