SAN FRANCISCO (NYTIMES) - Mr Mark Zuckerberg, Facebook's chief executive, plans to integrate the social network's messaging services - WhatsApp, Instagram and Facebook Messenger - asserting his control over the company's sprawling divisions at a time when its business has been battered by scandals.

The move, described by four people involved in the effort, requires thousands of Facebook employees to reconfigure how WhatsApp, Instagram and Facebook Messenger function at their most basic levels.

While all three services will continue operating as standalone apps, their underlying messaging infrastructure will be unified, the people said. Facebook is still in the early stages of the work and plans to complete it by the end of this year or in early 2020, they said.

Mr Zuckerberg has also ordered all of the apps to incorporate end-to-end encryption, the people said, a significant step that protects messages from being viewed by anyone except the participants in the conversation.

After the changes take effect, a Facebook user could send an encrypted message to someone who has only a WhatsApp account, for example. Currently, that isn't possible because the apps are separate.

By stitching the apps' infrastructure together, Mr Zuckerberg wants to increase the utility of the social network, keeping its billions of users highly engaged inside its ecosystem.

If people turn more regularly to Facebook-owned properties for texting, they may forgo rival messaging services, such as those from Apple and Google, said the people, who declined to be identified because the moves are confidential. 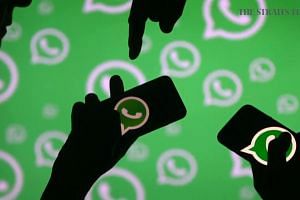 If users interact more frequently with Facebook's apps, the company may also be able to build up its advertising business or add new services to make money, they said.

Facebook is developing a cryptocurrency for WhatsApp transfers, sources say

US government is seeking Facebook's help to wiretap its Messenger app, say sources

In a statement, Facebook said it wanted to "build the best messaging experiences we can; and people want messaging to be fast, simple, reliable and private".

It added: "We're working on making more of our messaging products end-to-end encrypted and considering ways to make it easier to reach friends and family across networks."

Mr Zuckerberg's move to take more control of Facebook's disparate businesses follows two years of scrutiny of its core social network, which has been criticised for allowing election meddling and the spread of disinformation.

Those and other issues have slowed Facebook's growth and damaged its reputation, raising the hackles of lawmakers and regulators around the globe Mr. Zuckerberg has repeatedly apologised and vowed to fix the problems.

Knitting together Facebook's apps is a stark reversal of Mr Zuckerberg's previous stance towards WhatsApp and Instagram, which were independent companies that he acquired.

At the time that Facebook bought the firms, Mr Zuckerberg promised WhatsApp and Instagram plenty of autonomy from its parent company. (Facebook Messenger was a home-grown messaging service, spun out of the main Facebook app in 2014.)

WhatsApp and Instagram have since grown tremendously, prompting a change in Mr Zuckerberg's thinking, said one of the people.

The chief executive now believes tighter integration will benefit Facebook's entire "family of apps" over the long term by making them more useful, the person said. Mr Zuckerberg had floated the integration idea for months and began promoting it more heavily to employees towards the end of last year, the people said.

More recently, dozens of WhatsApp employees clashed with Mr Zuckerberg over the integration plan on internal message boards and during a contentious staff meeting in December, said four people who attended or were briefed on the event.

The changes may also raise questions of data privacy because of how user information may be shared between the services.

Today, WhatsApp requires people to register only a phone number to sign up for the service.

Matching Facebook and Instagram users to their WhatsApp handles could give pause to those who prefer keeping their use of each app compartmentalised.

"As you would expect, there is a lot of discussion and debate as we begin the long process of figuring out all the details of how this will work," Facebook said in a statement.

In many countries, people often rely on only one or two text messaging services.

In China, WeChat, which is made by Tencent, is popular, while WhatsApp is heavily used in South America.

But Americans are fragmented across multiple services, like Apple's iMessage, SMS and various Google chat apps.

For Facebook, the changes provide a better chance at making money from Instagram and WhatsApp, which currently generate little revenue even though they have vast numbers of users.

Instagram has one billion monthly active users, while WhatsApp has 1.5 billion.

Mr Zuckerberg does not yet have specific plans for how to profit from the integration of the services, said two of the people. But a more engaged audience could lead to new forms of advertising or other services for which Facebook could charge a fee, they said.

One business opportunity involves behaviour around Facebook Marketplace, a free Craigslist-like product where people can buy and sell goods on the social network. The service has grown popular in South-east Asia and other markets outside the United States.

When the apps are knitted together, Facebook Marketplace buyers and sellers in South-east Asia would be able to reach out and communicate with each other using WhatsApp - which is popular there - rather than using Facebook Messenger or another, non-Facebook text messaging service.

Eventually, that could lead to new ad opportunities or services for profit, said one of the people.

Within Facebook, some employees said they were confused as to why Mr Zuckerberg found putting the messaging services together so compelling.

Some said it was jarring because of his past promises about independence.

When Facebook acquired WhatsApp for US$19 billion (S$25.74 billion) in 2014, Mr Koum talked publicly about user privacy and said, "If partnering with Facebook meant that we had to change our values, we wouldn't have done it."

Early last month, during one of WhatsApp's monthly Tuesday staff meetings, it became clear that Mr Zuckerberg's mandate would be a priority in 2019, according to a person familiar with the matter.

One WhatsApp employee then ran an analysis on the number of potential new users in the United States that the integration plan could bring to Facebook, said two people familiar with the study. The amount was relatively meagre, the analysis showed.

To assuage concerns, Mr Zuckerberg called a follow-up meeting with WhatsApp employees later in the week, three of the people said.

On Dec 7, employees gathered around microphones at WhatsApp's offices to ask Mr Zuckerberg why he was so invested in merging the services.

Some said his answers were vague and meandering. Several WhatsApp employees have left or plan to leave because of Mr Zuckerberg's plans, the people said.

Unlike Facebook Messenger and Instagram, WhatsApp does not store user data or messages. It is the only one of the three services to currently use end-to-end encryption by default.

Encrypted messaging has long been supported by privacy advocates who fear governments or hackers may intrude into people's personal messages. But it will raise other issues for Facebook, particularly around its ability to spot and curb the spread of illicit activity or disinformation.

Last year, researchers had difficulties tracking disinformation on WhatsApp ahead of the Brazilian presidential election, before eventually finding ways to do so. WhatsApp has recently placed limits on how many times a message can be forwarded on its service, in an attempt to reduce the distribution of false content.