SAN DIEGO/HONG KONG/SYDNEY - More than one million students around the globe skipped school on Friday (March 15) and took to the streets, dramatically ramping up their protest against inaction on climate change by governments and big corporates.

In hundreds of cities across dozens of countries the message was clear: climate change is a crisis and needs to be treated as such.

That sort of tough talking has made some adults uncomfortable. But youth activists say the strikes will continue if their demands for much tougher climate action are not heeded.

Speaking at a school strike in San Diego, California, American teenager Kate Anchondo, 17, said: "We will never run out of ways to demand the right to a healthy environment. We will continue to disrupt the social order if we have to."

Young people, she said, are sometimes considered by the adults to be small and insignificant.

"But together, as students striking all over the world, we are the biggest and most powerful voice," added the high school student, who had organised the strike in line with the first global youth climate movement.

The March 15 event was inspired by Swedish teenager Greta Thunberg, 16, who went on the first solo climate strike last August.

She had refused to go to school in a bid to pressure her government into taking more drastic climate action. Since then, many young people have been inspired to do the same.

Friday's event, however, was the first global one. Estimates by international climate organisation 350.org said more than one million young people took part.

Students marched through cities and neighbourhoods broadcasting their message. In San Diego, they held up hand-drawn placards such as "respect existence, or expect resistance" and "don't burn my future".

Said 10-year-old Luna Uribe, who was at the San Diego climate strike held in front of Chula Vista City Hall: "If we let climate change go on, we won't have a future. And so I'm asking, please fix this, before my future is destroyed." 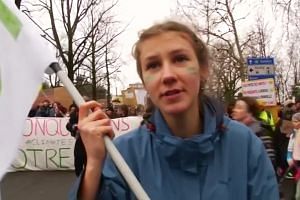 In Hong Kong, chants of "we want change" and "seas are rising, so are we" drifted through the air, drawing the attention of curious onlookers as 800 to 1,000 people marched from Chater Garden in Central to the government's headquarters in Admiralty.

Participants had started streaming into the park in Central before 11am, many holding placards and armed with optimism and a sense of purpose, despite the Education Bureau's firm disapproval of students boycotting classes.

The march was led by classmates Zara Campion, Elisa Hirn and Emily Tarr, who wanted to raise environmental awareness among Hong Kong's youth.

Swedish-born Ms Hirn, 17, said the group has written a statement to the government.

"One of our biggest requests is to have a youth delegate in the government so that the younger people can work more closely with the government, and hopefully through that we can push for other bigger ideas that we have in mind."

The trio also called on the government to at least double its renewable energy target. The government's climate action plan is to raise it to three to four per cent by 2030, from the existing one per cent.

"Guangzhou uses more than 30 per cent renewable energy while we only use one per cent and that's a huge gap because it's so close to us and yet, we're so different and we're lagging so much behind."

Hong Kong student Charlie Jackson, 11, said: "Parents always say that they love their kids but then they're actually kind of polluting our future." He said he started taking more public transport as part of efforts to save the world.

In Sydney, about 20,000 students marched through the city centre, demanding politicians "listen to the science". The protests came ahead of a state and then a federal election.

Thea Archibald, 16, who was protesting with a group of school friends, said she wanted "a better future for my children".

"I would just like the government to be more aware and stop denying problems that have been proved by science," she told The Strait Times.

The students directed much of their anger at Australia's Prime Minister Scott Morrison, who has resisted action to curb carbon emissions and has voiced support for the coal industry.

His calls for students to stay in school had little effect. About 150,000 students protested around the country.

"They are not listening to the symptoms - the droughts, the bushfires, the storms, the rising oceans," she said.

Many pointed to the importance of individual choices, such as walking more and taking public transport. These can reduce pressure on the environment.

But the urgency of the problem required implementation of bold policies and actions. "For that to happen, it takes all of us to come out and push our elected officials to do so," said Ms Anchondo during the climate strike in San Diego.

Shy but iron-willed: Swedish teen Greta Thunberg's conviction to save the planet inspires many others

The planet has already warmed, on average, one degree Celsius since pre-industrial times and is on track to warm 1.5 deg C as early as 2030, the UN climate panel says, unless the world starts making drastic emissions cuts.

The 2015 Paris climate conference pledge to keep the increase in global average temperatures to below 2 degrees Celsius above pre-industrial levels to avoid a climate catastrophe but the world is far off course in achieving that target.

The years 2014 to 2018 were the five warmest years on record, according to the US National Oceanic and Atmospheric Administration and the 20 warmest occurred over the past 22.

Mayor of Chula Vista Mary Salas, who attended the strike in San Diego, told The Straits Times she was encouraged by Ms Anchondo's initiative to address "the biggest problem facing their future".

"I thought that as mayor of the city of Chula Vista, I should do all I could to make them feel welcome. So I invited them to this space here at City Hall," she added.

Moreover, climate action is also aligned with the city's commitment towards environmental protection. In 1998, for instance, the city adopted a climate action plan in 1998 - the first city in San Diego county to do so - and was also the first city to adopt a multiple-species conservation plan to protect wildlife, said Ms Salas.

In an e-mail interview with The Straits Times, Ms Thunberg said that everyone has a role to play in making the "enormous changes" required to limit global warming.

Going vegan, buying only what is needed, and avoiding taking airplanes, is a good start on a personal level. But larger-scale changes are required.

"But you must also realise that the changes required are beyond today's economical system. We need a whole new way of thinking."