WASHINGTON (REUTERS, BLOOMBERG) - The US State Department on Monday (Jan 27) warned against visiting China and said Americans should not travel to the Hubei province, given that the province's city of Wuhan is ground zero for a new deadly coronavirus.

The State Department has already ordered the departure of all non-emergency US personnel and family members from the province and the "US government has limited ability to provide emergency services" to its citizens there.

It said travellers should be prepared for the Chinese government to put travel restrictions in place "with little or no advance notice."

The State Department also said the US may also expand travel screening at its borders and is closely monitoring 110 people to stop the virus that has killed at least 80 in China and is appearing around the globe from Singapore to Paris.

As of Monday morning, there have been no new US cases after the first five patients were identified in the past week, health officials said on a call with reporters.

The Centers for Disease Control and Prevention, which is spearheading the American response, said it's developed plans for a test that it will share with states in order to more quickly diagnose new cases.

"At this time in the US, this virus is not spreading in the community," said Nancy Messonnier, the CDC's director of the National Center for Immunisation and Respiratory Diseases.

Officials have been on close watch for cases of so-called secondary transmission, in which original patients who came from China could infect others in the community.

Anxiety is growing amid evidence that the disease has an incubation period of as long as two weeks before those infected start to show symptoms.

That raises the possibility that people could travel and eventually infect others before realising they have the illness. But Messonnier said that so far there has been no clear evidence that the virus can spread during the incubation period before patients have symptoms.

The new coronavirus appears to be less contagious than highly infectious viruses like the measles, she said. Coronaviruses like this one, so named because of their crown-like shape, are generally transmitted by respiratory droplets, she said. 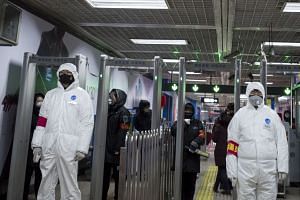 A decision on expanded traveller screening should come within a day, Messonnier said.

Public health officials in China and around the globe have mounted an aggressive attempt to stop the spread of the virus, which can cause a potentially deadly pneumonia-like illness in the most severe cases.

While cases in other countries has been limited, Chinese officials said the virus isn't yet under control despite aggressive steps to limit movement for millions of people who live in cities near Wuhan, the centre of the outbreak.

The US has five cases, with three confirmed over the weekend: two in Southern California and one in Maricopa County, Arizona. All the patients had recently been in Wuhan and are hospitalised.

Their close contacts are being monitored for signs that they may be developing the disease, the CDC said Sunday. Washington state and Chicago earlier had confirmed infections.

Stocks slumped around the globe on fears over the virus, with the S&P 500 Index sliding the most in almost four months. Bonds and gold rallied.

Coronavirus: Key moments of the outbreak so far

Deaths in China climbed to 80, the National Health Commission said Monday. That's up from only two just over a week ago. There are at least 2,744 confirmed cases on China's mainland, and more than 30,000 people who are under observation.

Last week the WHO declined to label the coronavirus an international emergency, a designation that would have allowed the United Nations agency to begin coordinating government responses.