WASHINGTON (WASHINGTON POST) - There have been stories about passengers flying with cats and dogs and miniature horses.

The list also includes a peacock, a hamster, a duck wearing a diaper - and a defecating pig.

A passenger was removed from a Frontier Airlines flight late on Tuesday (Oct 9) when she attempted to fly with her "emotional support" squirrel, then refused to get off the plane when she was told no, according to the airline.

A Frontier spokesman said in a statement that the passenger had alerted the airline that she would be bringing an emotional-support animal on the flight. But she did not mention it would be so bright-eyed and bushy-tailed.

"Rodents, including squirrels, are not allowed on Frontier flights," the statement read.

"The passenger was advised of the policy and asked to deplane." 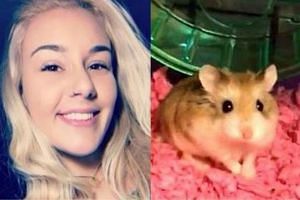 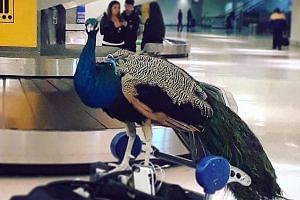 When the passenger declined, others aboard Flight 1612, which was travelling from Orlando to Cleveland, were forced to deplane so that authorities could remove the woman from the aircraft.

Fun fact: Frontier Airlines features a variety of animals on the tails of its planes, among them "Foxy the Red Fox," "Rudy the Raccoon," "Jim Bob the Badger" and even "Sammy the Squirrel."

The Orlando Police Department said that the squirrel's owner had boarded the plane, but that when airline personnel noticed she had a cage containing the little critter, they asked her to deplane. When she refused, authorities were called to escort her from the plane.

Authorities said that the passenger vacated the plane when officers arrived and that they "did not have to take any action."

A video posted on Twitter shows a crowd gathered at Gate 15. The post read: "I just want everyone to know that all passengers had to deplane my flight to cleveland because a woman brought a SQUIRREL ON THE PLANE."

A subsequent video showed a woman being escorted through the airport in a wheelchair as others clapped and cheered.

Emotional-support animals, or "comfort animals," are not the same thing as service animals or therapy animals, which are typically trained to assist people with emotional and physical disabilities.

As The Washington Post has reported, emotional-support animals are not covered under the Americans With Disabilities Act, meaning businesses are not required to accommodate them. Federal regulations permit them on aeroplanes but give the airlines permission to turn away unusual animals.

According to The Post's Karin Brulliard: "Though the Americans With Disabilities Act defines service animals as trained dogs or miniature horses, airlines are bound by the more liberal Air Carrier Access Act of 1986, which allows free travel for 'any animal' that is trained to assist a person with a disability or that provides emotional support. Airlines can require passengers with creatures in the second category to produce a letter from a physician or mental health professional, but the documents are easily forged or obtained from websites that provide cursory, questionnaire-style 'exams.'

"The result, airline officials complain, has been a surge in poorly trained animals that has turned some flights into airborne menageries, with dogs blocking beverage carts, cats urinating on seats and ducks wandering the aisles."

Said Ms Taylor Garland, a spokesman for the Association of Flight Attendants, which applauded Delta's changes: "It's created a real issue on our planes."

She said one union member was asked to administer oxygen to a dog that, according to its owner, was having anxiety mid-flight. Others have been bitten.

"The aircraft cabin is a unique space, and we need to recognise the limitations that exist when you're flying in the air in a metal tube."