WASHINGTON (REUTERS) - In the opinion of Army Secretary Mark Esper, President Donald Trump's pick to lead the United States military, Washington was late to recognise that America will be locked in a strategic competition with China for years to come.

Mr Esper says he was focused on Beijing's growing military might long before the Pentagon rolled out a National Defence Strategy in 2018 that prioritised competition with China and Russia over counter-insurgencies in places like Afghanistan.

China has been a personal priority as far back as the 1990s, including when Mr Esper worked as an aide on Capitol Hill after more than a decade in the Army, he told Reuters.

"We may be a little bit late - we are late - coming to the recognition that we are in a strategic competition with China," Mr Esper said in an April interview.

He noted he was a Pacific war planner on the Army Staff, the branch's senior leadership body, in the mid-1990s.

"The issue of China, competition with China, China's capabilities, is not a new one to me ... That is both the foundation and the shaping of my views on these various issues, because I've watched this evolution for 20 years now."

Competition with Russia has also been a focus. At a recent Atlantic Council event, Mr Esper noted that the US military's superiority over adversaries like Russia and China has eroded since the end of the Cold War, when the US could decide how and when it wanted to fight.

"Today, Russia and China are aggressively developing formations and capabilities and weapons systems that deny us that long-held advantage," Mr Esper said.

Mr Trump, who has championed a tougher approach to China, told reporters on Tuesday (June 18) that Mr Esper would likely be his nominee for the top job at the Defence Department. He is expected to take the helm in an acting capacity in the coming days, a defence official said.

But his name had long been among the contenders to become secretary should current Acting Defence Secretary Patrick Shanahan fail to get the job. Mr Shanahan, who also sought to prioritise China, announced on Tuesday that he would resign.

Mr Shanahan's critics questioned his lack of experience in national security matters, and fretted about potential conflicts of interest, given his past as an executive at defence and aerospace giant Boeing.

Mr Esper's recent past at defence contractor Raytheon, where he spent seven years as vice-president for government relations, is raising similar concerns.

"I'm not thrilled that the next acting defence secretary is a former Raytheon executive," said Ms Mandy Smithberger, director of the Centre for Defence Information at the Project On Government Oversight, a non-governmental watchdog group.

But Mr Esper also has deep military bona fides going back to his days at the US Military Academy at West Point, from which he graduated in 1986. 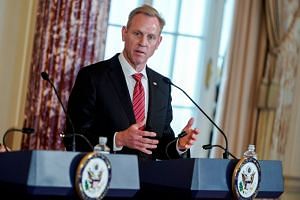 He served in the 1991 Gulf War as an infantry officer with the 101st Airborne Division and later commanded an airborne rifle company in Europe, according to the Army's website. His Pentagon experience includes serving as a deputy assistant secretary of defence.

Mr Esper will lead the Pentagon at a time when US officials privately wonder whether increasing tensions with Iran could impact the National Defence Strategy's China and Russia focus.

The Pentagon has announced two new troop deployments to the Middle East in recent weeks, totalling about 2,500 troops.

Both are still small in the context of the about 70,000 American troops now stationed across a region that stretches from Egypt to Afghanistan. But bigger deployments could mean less resources for the China and Russia challenge, experts say.

Lawmakers, including Mr Trump's fellow Republicans, have expressed concern that the Pentagon still lacks a confirmed defence secretary, who would be more empowered to speak plainly, without fear of political backlash that could cost him his job.

Mr Shanahan, who made Pentagon history this year as the longest-ever serving acting defence secretary, took the job at the start of the year, after Defence Secretary Jim Mattis abruptly resigned over policy differences with Mr Trump.

"(Trump) thinks highly of him and he knows I do too," Mr Inhofe said.

"I have known Esper for years, both as a staff member on the Hill and in private industry, and believe the Department would benefit from his leadership," he said in a statement.