NEW YORK (NYTIMES) - The Trump administration seems confident that consumers will not feel pain from its escalating trade war with China.

"Because it's spread over thousands and thousands of products, nobody's going to actually notice it at the end of the day," US Commerce Secretary Wilbur Ross told CNBC on Tuesday (Sept 18) when asked about the administration's latest round of tariffs on Chinese imports.

But a pain-free trade war with China is nearly impossible.

For US consumers, prices have already risen on some products that the administration targeted for tariffs this year - most notably, washing machines, which were subjected to steep tariffs in January.

It is true, as Mr Ross noted earlier in his CNBC interview, that the administration has thus far devised such tariffs to minimise sticker shock on retail store shelves for US customers.

The list of imports set to be "tariffed", as President Donald Trump proclaimed on Monday, still does not include T-shirts, smartphones or many other popular products that US stores import from China.

The US$200 billion (S$274 billion) list unveiled Monday will start with a tax of 10 per cent and rise to 25 per cent in the new year, a move that should mute the effect of this round of tariffs on holiday shoppers.

Next year, though, those products will almost certainly grow noticeably more expensive. China has already vowed to retaliate, raising the possibility that Mr Trump will announce, as soon as this week, that he plans to impose tariffs on another US$267 billion in Chinese imports - basically, everything Americans buy from their largest trading partner.

"China has been taking advantage of the United States for a long time, and that's not happening anymore," Mr Trump said at a news conference on Tuesday (Sept 18).

"We can't let that happen."

Tariffs are ultimately a tax on businesses and consumers, and with each new round, the administration is bringing them closer to home for the typical American.

Tariffs on thousands of products are "death by a thousand cuts", said Mr David French, the senior vice-president for government relations for the National Retail Federation, which opposes the administration's approach.

"In the aggregate, household budgets will feel the impact."

How we got here

China's trade practices have long been a source of frustration for US companies, which are not able to gain access to parts of China's market and are forced to hand over valuable technology and trade secrets to Chinese partners in exchange for operating there.

In June, the Trump administration said talks to change China's trade behaviour - which had spanned decades - were going nowhere and announced duties on US$50 billion worth of Chinese imports.

The first round was intended to minimise pain on U.S. consumers: Chinese aircraft engine parts, bulldozers, ball bearings, motorcycles and industrial and agricultural machinery were among the products targeted initially.

China hit back with tariffs of its own on US$50 billion of US products and focused on the agriculture sector - punishing industries whose workers largely supported Mr Trump.

Things have gone downhill from there. Mr Trump said he would impose tariffs on US$200 billion worth of Chinese products including consumer items, such as food, tools, housewares and some, but not all, electronics.

A new front in the war on Christmas

The initial effect of the new US$200 billion round of tariffs will be felt just ahead of the holiday shopping season in the United States. Higher prices for imported materials such as cotton, nylon, polyester and yarn means that clothing companies will have to pass additional costs on to consumers.

Then, there are accessories. The tariffs will apply to imported purses, golf bags, ski gloves and mittens. 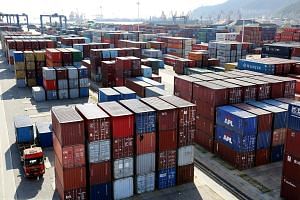 US companies in China say tariffs are hurting: Survey

Retailers are not sure how fast the price increases will make their way to store shelves, but they are bracing for the worst.

Mr French, of the retail federation, said many buyers are more likely to see big price effects next year than during the holidays.

Consumers could start to see higher prices in the grocery aisles. A wide variety of fish, including sea bass and sturgeon, as well as nuts, fruit, vegetables, rice and cereal did not escape the Trump administration's tariffs.

The next wave will be worse

Mr Trump isn't done punishing China and has threatened to tax another US$267 billion worth of goods if China retaliates against the US - which would mean America taxes nearly everything that enters from China.

On Tuesday, China said it would impose tariffs of its own on an additional US$60 billion in US goods.

Businesses are bracing for an unending trade fight. They're not exactly sure how it will affect prices, but they do not believe it will be helpful.

"In some cases you're not going to see those costs absorbed, and they're going to get passed on. In some cases, we're going to absorb it where we can," the chief executive of Macy's, Mr Jeff Gennette, told CNBC this week.

"We're going to see how the customer votes on this."

"We are closely monitoring the tariff discussions and are actively working on mitigation strategies, particularly in light of potentially escalating duties," he added.

The lobbying will continue

The steel and aluminium tariffs that Mr Trump imposed earlier this year prompted a wave of lobbying from countries, trade groups and corporations that wanted their individual products exempted from the levies.

A similar exclusion process has been established for the China tariffs, with one key difference: If one company wins an exclusion to import, say, ski gloves, then any company that imports ski gloves will receive the same exemption. To date, the administration has not ruled on any of those exclusion requests.

Some companies and industries have persuaded the administration to grant them at least temporary relief from tariffs by leaving them off the US$200 billion list. Apple's lobbying proved successful in the most recent round, as its watches and Bluetooth devices were removed from the preliminary tariff list.

Prices will Increase, but inflation is likely to stay tame

Mr Ross' best case on prices might be that, even if consumers notice them on individual products, the increases will not add up to runaway inflation.

Tariffs tend to increase consumer prices, but analysts say the increase in prices from Mr Trump's tariffs is likely to be small, at least for now.

Economists at TD Securities said in a research note on Tuesday that they expected the tariffs to add 0.1 percentage points to the inflation rate over the next year.

They added that countervailing consequences, like a stronger dollar, could easily offset the effect on prices.