But on Wednesday (Nov 20), Congress put Mr Trump on the spot, sending him tough legislation that would impose sanctions on Chinese officials for cracking down on the protesters and could end Hong Kong's favoured economic relationship with the US.

The measure lands on the President's desk at a sensitive moment. His trade talks with Beijing are becalmed, and a Dec 15 deadline for him to decide whether to renew major tariffs on Chinese goods is approaching.

China's government has responded with fury to the measure and demanded that it not become law.

The Bill, titled the Hong Kong Human Rights and Democracy Act, is a test of Mr Trump's commitment to the US' historical mission of promoting human rights and democracy abroad.

Members of both parties have urged the President to speak out more forcefully on behalf of demonstrators resisting what they call Beijing's tightening grip over the semi-autonomous island territory, to little avail.

"This is really going to be a test. In general his approach to the China challenge has been very focused on the trade aspects of the relationship," added Ms Rosenberger, a senior fellow at the German Marshall Fund of the United States.

The White House declined to comment on whether Mr Trump would sign the measure, which passed the Senate unanimously and the House with only one lawmaker opposed, creating a solidly veto-proof majority. 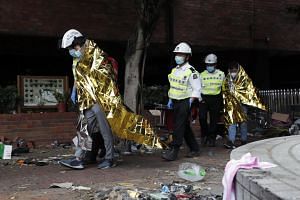 China ready to 'fight back' over US Hong Kong Bill

Presidents have 10 days to sign approved legislation, but that clock is suspended when Congress is adjourned, as it will be next week for the Thanksgiving holiday.

Speaking on CNBC on Thursday, the measure's Senate sponsor, Mr Marco Rubio, said that he expected it to win Mr Trump's approval.

"My understanding is they will sign it," he said.

Mr Trump could still invoke presidential authorities to avoid or delay enforcing some of the Bill's provisions, according to people familiar with the measure, potentially blunting its impact in the near term as well as criticism from Beijing.

"If the US continues to make the wrong moves, China will be taking strong countermeasures for sure," a spokesman for China's Foreign Ministry, Mr Geng Shuang, told reporters in Beijing on Thursday.

Without naming Mr Trump, he urged the US to "stop its wrongdoing before it's too late, prevent this act from becoming law" and "immediately stop interfering in Hong Kong affairs and China's internal affairs".

China often issues angry criticisms of Washington with little follow up. And Chinese negotiators have also pushed to isolate the trade talks from a range of security-related matters, including the Trump administration's crackdown on Chinese telecom firm Huawei and the American sale of fighter jets to Taiwan.

"What has been surprising to me throughout the trade negotiations has been the degree of China's willingness to compartmentalise issues," said Mr Evan Medeiros, another top China aide in the Obama White House.

"Obviously, the Chinese don't want the President to sign it. But are they going to be willing to blow up the trade deal to do so?" added Mr Medeiros, now a professor at Georgetown University's Walsh School of Foreign Service. "I don't think they will, in large part because they understand he has a lot of discretion with this particular Bill."

In June, Mr Trump told President Xi Jinping of China that he would not publicly back the protesters as long as trade talks were progressing.

Administration officials have said that they have some reservations about striking a trade deal with China at a time when violence in Hong Kong could worsen but that it is not the main impediment to reaching an agreement.

Congress acted on the measure, which had been stalled, after the riot police challenged student activists on campuses for the first time this month. Mr Trump has said he hopes the crisis "works out for everybody" and has suggested that the matter is an internal affair for China to resolve.

The measure requires the State Department to certify annually whether Hong Kong's government is maintaining democratic and civil society freedoms, such as judicial independence and freedom of the press, that were promised by China's government when Britain handed over its former colony to Beijing in 1997. If Hong Kong fails that test, it would lose a preferred trading status that plays a major role in its economy.

It would also require sanctions on Chinese officials deemed responsible for arbitrary detention, torture or forced confession of demonstrators and other political dissidents.

But the Bill could be another impediment to a so-called Phase 1 trade deal, whose fate is increasingly unclear.

Mr Michael Pillsbury, a China expert at the conservative Hudson Institute with close ties to the Trump administration, said that Mr Trump could blunt the measure's impact on the trade talks by delaying his signature until after such a deal is reached.