WASHINGTON (NYTIMES) - US President Donald Trump on Wednesday (June 20) sought to quell the uproar over his administration's systematic separation of immigrant children from their families at the border, signing an executive order he portrayed as ending the problem.

Here is what it does and does not do:

WHAT CAUSED THE PROBLEM?

Previously, many families caught sneaking across the border - especially those seeking asylum - were released into the United States while their immigration cases were processed. But in April, Attorney General Jeff Sessions announced that federal prosecutors would now pursue a zero-tolerance policy of criminally prosecuting every adult who illegally crossed the border or tried to do so.

That meant that if adults were sent to jail or long-term indefinite detention while their asylum requests or removal orders were processed, the children could not stay with them. As a result, the Trump policy of prosecuting adults has also led to a practice of separating families and holding children while trying to place them in a licensed facility.

No. His order explicitly states that the executive branch will continue to criminally prosecute people who cross the border illegally, signalling that the zero-tolerance policy remains in place.

WHAT DOES THE ORDER CHANGE?

The order states that it is now the policy of the Trump administration to keep families together. It appears to envision a system in which families will be housed together in ad hoc detention centres, including on military bases, that the administration hopes a court will approve.

It calls for many agencies - including the Pentagon - to make available "existing facilities," or to construct them, for the Department of Homeland Security to use "for the housing and care of alien families."

WILL THIS HAPPEN RIGHT AWAY?

The answer is unclear. At a briefing organised by the White House on Wednesday afternoon, Gene Hamilton, a counselor to Sessions, sidestepped a question about whether a family that shows up now would be separated. He said that an "implementation phase" would happen but that he was not sure precisely what the departments of Homeland Security and Health and Human Services would do. 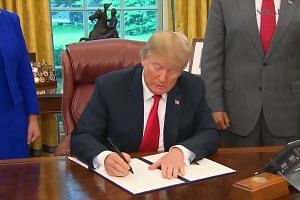 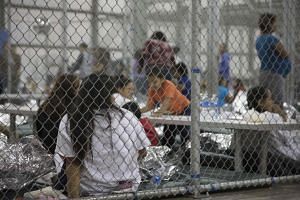 Since the administration has concluded that it can detain families together for up to 20 days under the existing rules, the start of the revised policy may turn on how much family-style detention space is available and how many new families are apprehended.

Separately, a Justice Department official said that family separation was prompted in the past when adults were taken into the custody of US marshals, while children were held by Immigration and Customs Enforcement (ICE) for three days and then transferred to the Health and Human Services Department.

Under the new plan, the official said, the entire family will stay in ICE's hands. While the adults will still be prosecuted, that will prevent the need to immediately separate family members. The administration appears to be hoping that the courts or Congress will change the rules within 20 days, allowing families to be detained together indefinitely.

WHAT DOES THE FLORES CASE HAVE TO DO WITH THIS?

The long-running class-action litigation over the treatment of children in immigration custody ended with a 1997 consent decree known as the Flores settlement. Under it, the government has been obligated to release children from immigration detention to relatives or, if none can be found, to a licensed programme within about three to five days. If that is impossible, they must be held in the "least restrictive" setting appropriate to their age and needs.

In the second term of the Obama administration, amid a surge of migrants from Central America arriving at the southwest border, the administration adopted a policy of detaining families headed by women together while their cases were processed. After those conditions were challenged in court, Judge Dolly M. Gee of US District Court for the Central District of California ruled that the Flores settlement terms also applied to accompanied minors, so holding children with their mothers in indefinite immigration detention was unlawful.

The 9th US Circuit Court of Appeals, in San Francisco, affirmed that decision in 2016.

HOW MUCH CAN TRUMP DO WITHOUT COURT PERMISSION?

The most important part of Trump's order set in motion a request to get a court to approve holding families together for longer than 20 days. The order directs Sessions to promptly ask a federal court to "modify" the consent agreement in a manner that would permit the Department of Homeland Security to hold families together throughout immigration court proceedings.

At his press briefing, Hamilton said that unless Congress acted sooner to change the law, it would be up to Gee to decide whether the administration could keep families together.

The Trump administration continues to blame Congress for the problem, saying that lawmakers need to act to make it easier to hold families together and to adjudicate immigration cases more quickly. Trump's order is titled "Affording Congress an Opportunity to Address Family Separation," and Hamilton said that "Congress needs to provide a permanent fix for this situation."

WHAT HAPPENS TO THE CHILDREN ALREADY SEPARATED?

The administration has decided not to try to reunite children and parents who were separated at the border under the zero-tolerance policy, Kenneth Wolfe, a spokesman for the Health and Human Services Department, confirmed.

The executive order, which did not address separated families, will apply only to families who arrive moving forward, while children already in the department's custody will go through the standard process, where the government tries to find a parent or other close relative already in the country who can take care of the children and bring them to their immigration court proceedings.

More than 2,300 children were separated from their parents at the border and placed in government-licensed shelters or in temporary foster care with families across the country.

HOW DO THESE PARENTS DIFFER FROM OTHERS WHOSE CHILDREN WERE REMOVED BY THE GOVERNMENT?

The migrant parents did not lose custody of the children because of poor parenting.

"Nobody judged these parents were incapable of taking care of their kids," said Kay Bellor, a vice president at Lutheran Immigration and Refugee Service.

Lutheran is one of several nonprofits that have found temporary foster families to care for children separated from their parents at the border. Bellor said that none of them have been reunited with their parents since the separation.

WAS AN EXECUTIVE ORDER NECESSARY?

No. Trump likes the flourish of signing executive orders in front of cameras, but most of his have amounted to asking his administration to conduct reviews and come up with proposed solutions to problems, or they have consisted of directives that he could have instead made with a phone call. This is one of those orders.