Verizon, one of America's largest telecommunication companies, began rolling out its 5G services in Chicago and Minneapolis on Wednesday US time, a week ahead of schedule.

But according to Yonhap, the South Korean launches came two hours earlier.

“SK Telecom today announced that it has activated 5G services for six celebrities representing Korea as of 11pm April 3, 2019,” the country’s biggest mobile operator said in a news release on Thursday.

Both KT and LG Uplus said they also went live at the same time. For general customers, the services will be available from Friday – the previous launch date – when Samsung Electronics rolls out the Galaxy S10 5G, the world’s first available smartphone using the technology.

In the US, Verizon customers with unlimited data plans in parts of Minneapolis and Chicago can get speeds of up to 1 gigabit per second on a limited number of phones for an extra US$10 (S$13) a month. The initial launch is part of a 30-city goal for 5G service this year.

The move makes Verizon the first wireless carrier in the US to flip the switch on speedy, smartphone-ready 5G service in select urban areas, the company said in a statement.

"For the first time ever, customers can access a commercial 5G network with the world's first commercially available 5G-enabled smartphone," Verizon said in a statement.

Other US carriers including AT&T, Sprint and T-Mobile have pledged to do the same in the coming months.

Countries including South Korea, the US, China and Japan are racing to market 5G, hoping the technology will spur breakthroughs in fields such as smart cities and autonomous cars.

Through the placement of small boxes that serve as conduits for invisible, data-transmitting radio waves, 5G networks could power a wide range of consumer devices, from smartphones that can stream Netflix videos more quickly to enabling the arrival of self-driving cars.

South Korea claimed to be the first country to launch 5G, but that was disputed by US carriers who say they rolled out 5G in limited areas as early as last year. 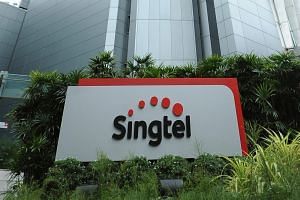 First 5G augmented reality call made between Singapore and Australia

What you need to know about 5G

US telco AT&T said it was the first to launch a “commercial and standards-based” 5G network in December 2018. The service, however, was made available to mobile hotspot devices but is not yet on phones.

In South Korea, telcos and smartphone makers are pulling out all stops to market 5G services and devices. The company said it was working with its memory-chip making affiliate SK Hynix to build a highly digitised and connected factory powered by 5G technology.

Samsung was the first to unwrap a 5G phone in February when it unveiled the Galaxy S10 5G and a nearly US$2,000 folding smartphone, putting the world’s top smartphone maker by volume in pole position in the 5G race, some analysts say.

While security concerns over 5G networks using telecom equipment made by China’s Huawei Technologies Co have marred the buildup to the release of these services, South Korean telcos have tried to shrug them off.

“I don’t think we have a security issue in South Korea,” Mr Park Jin-hyo, head of SK Telecom’s information and communication tech research centre, told reporters. He added that the company uses advanced technology to block eavesdropping or hacking into 5G networks.

But SK Telecom officials said it was likely there will be an open auction for network equipment makers including Huawei if South Korea needs more base stations for higher frequencies. The country has one of the world’s top smartphone penetration rates.