Toys 'R' Us mascot Geoffrey the Giraffe might be given a fresh start as a wildlife conservation ambassador, if the company decides to take up an offer from a zoo in the United States.

In a video posted on YouTube last Friday (June 29), the San Antonio Zoo said it would like to offer Geoffrey a job as a mascot for giraffe conservation, to save him from "going extinct".

"Here at San Antonio Zoo, we're passionate about securing a future for wildlife, and we'd like to secure a future for Geoffrey so that he can be a mascot for giraffe conservation," said zoo employee Brittany in the video.

The zoo has also set up a online crowdfunding campaign on GoFundMe called "Help San Antonio Zoo Save Geoffrey", to raise funds for the Giraffe Conservation Foundation.

It added that it hopes it can raise more than $100,000 to persuade the owners of Toys 'R' Us to donate the intellectual property rights of the giraffe mascot.

Save Geoffrey. Save Giraffes.

"This is a chance for Geoffrey and the great people at Toys 'R' Us to leave a legacy gift that has the potential to change the world and bring smiles to children for generations to come," the GoFundMe campaign read, which ended with the hashtags #SaveGeoffrey and #SaveGiraffes. 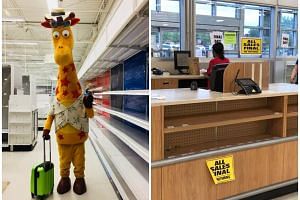 As of Wednesday, the campaign has raised $1,155 in five days, from donations from five people.

The toy retailer shut down all of its 735 stores in the US last week, after the company filed for bankruptcy.

Last Saturday, a photo of Geoffrey the Giraffe leaving an empty Toys 'R' Us store went viral after it was posted on Facebook by an employee.

The mascot was seen wearing a beach shirt, with a hat and sunglasses on its head, and his right hand on a trolley luggage.