PARIS (AFP) - The United States is driving a worldwide waste boom that poses a severe risk to human health, the environment and the economy, according to a new study of global garbage trends published on Wednesday (July 3).

Data on the combined solid, plastic, food and hazardous waste of 194 countries showed that the world now produces an average of 2.1 billion tonnes of trash each year - enough to fill more than 820,000 Olympic-sized swimming pools.

Just 16 per cent of this (323 million tonnes) is recycled, while 950 million tonnes is disposed of "unsustainably", according to risk management firm Verisk Maplecroft.

Analysis showed that US citizens and businesses produce far more per capita than their fair share.

At an average of 773kg per head, the country generates around 12 per cent of global municipal solid waste - approximately 239 million tonnes annually.

This is over three times the global average and more than seven times that of Ethiopia, the least wasteful nation.

In addition, the US' insatiable consumption is not matched by its recycling capacity. 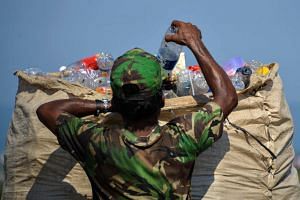 Indonesia returns five containers of waste to the US

At 35 per cent, the US was ranked one of the worst of the developed nations for recycling, and significantly behind countries such as Germany, which recycles 68 per cent of its waste.

The report's authors also warned that recent or impending bans on solid waste imports by a number of Asian importers, including China, Thailand, Vietnam and Malaysia could make it even harder for big waste-producers to manage the growing problem.

China's decision to ban 24 varieties of solid waste imports last year, including many plastics, is predicted to create a 111-million-tonne waste mountain by 2030, based on current trends.

Plastic waste pollution in particular has reached epidemic proportions with an estimated 100 million tonnes of plastic now found in the oceans, threatening marine life and the tourism industry.

Although a number of nations have pledged to reduce consumption of single-use plastics, a monitor said last month that global production is still climbing, led largely by Asia and a shale-gas production boom in America.

Niall Smith, senior environment analyst at Verisk, said it was up to businesses as well as governments to reduce their waste and invest in more recyclable options.

"Beyond the potential financial impacts, the reputational risks for business are high if they ignore intensifying interest in the issue from consumers and investors," he said.