WASHINGTON (BLOOMBERG) - Upcoming US-South Korean "war games" may be on hold, but the Pentagon is moving forward with plans to upgrade missile defence systems designed to counter a strike by North Korea against Seoul or other regional allies, according to the director of the US Missile Defense Agency.

"We absolutely hope that diplomacy is successful," Air Force Lieutenant General Sam Greaves said in an interview on Tuesday (June 26) in Washington, "but at the same time we must remain vigilant to provide the capability that's needed."

The Defense Department is sticking with plans to bolster the high-altitude interceptor known as Thaad as well as lower-altitude Patriot interceptor batteries deployed on the Korean peninsula, Greaves said.

It's the mixture of conciliation and strength that US Defense Secretary Jim Mattis is trying to project on a visit that brought him to Beijing on Tuesday, with stops to follow in South Korea and Japan.

"I want to go in right now without basically poisoning the well at this point," Mattis told reporters before departing on his trip. "I want to go in and do a lot of listening."

Mattis confirmed last week that he has suspended some impending joint exercises with South Korea on orders from President Donald Trump. But the suspension did not apply to the longer-term missile defence upgrades, Greaves said.

Trump appeared to surprise aides and allies when he announced June 12 that "we will be stopping the war games" following his talks with North Korean leader Kim Jong Un in Singapore. Trump - who wrote in a tweet that "there is no longer a Nuclear Threat from North Korea" - also said he wants to avoid harsh rhetoric against Kim and his country, at least while talks between the two sides are productive.

But the Pentagon plans for all contingencies. Its latest national defense strategy describes North Korea as a rogue regime that "seeks to guarantee regime survival and increased leverage by seeking a mixture of nuclear, biological, chemical, conventional, and unconventional weapons and a growing ballistic missile capability to gain coercive influence over South Korea, Japan, and the United States."

The missile defence upgrades were aided by Senate passage last week of its version of the US$716 billion defense policy bill, which authorized an extra US$284 million for the improvements, more than the US$81 million requested by the Pentagon to continue the integration effort.

Thaad - the Terminal High Altitude Area Defense system built by Lockheed Martin Corp. - was controversial even before Trump allowed its deployment to go forward in April 2017. With its advanced radar and its ability to target short and medium-range missiles at high altitudes in their "terminal" phase, as they descend, China says Thaad threatens its security and has repeatedly called for its removal from the Korean peninsula.

The system's installation was also greeted by some protests in South Korea. President Moon Jae-in denounced the deployment before he was elected, though he later embraced it as North Korea ramped up its ballistic missile and nuclear bomb tests. 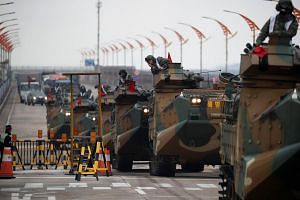 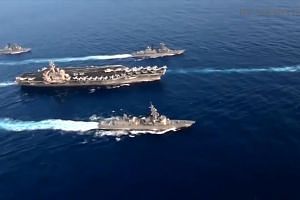 What do Americans think about outcome of Singapore Summit? The jury's still out

The added funds from Congress are expected to further the design, development and eventual deployment of three main capability upgrades called for by US and South Korean commanders in a request known as a "Joint Emergent Operational Need."

That includes strengthening the capabilities of the Thaad and Patriot systems to communicate and feed off each other's targeting data. That upgrade has already been tested once this year, Greaves said. During the test, data was passed from Thaad's Raytheon Co. radar known as the AN/TPY-2 to a Patriot battery located some distance away. This allowed Patriot missiles to be automatically fired based on the other missile system's radar.

The second improvement will be introducing on the Korean peninsula the latest, more powerful version of the Patriot missile called the "Missile Segment Enhancement" and integrating it with Thaad batteries, according to Greaves.

The third improvement will be to develop and field a communications capability that lets a Thaad missile launcher move farther from its command location, covering a wider area.

When deployed, these capabilities will allow the Thaad and Patriot systems "to work in a coordinated fashion resulting in more effective and cost efficient layered defense" - meaning the more expensive missile intended for high-altitude targets could be saved when a cheaper Patriot can be used instead, Greaves explained.

The upgrades will continue "unless we get different direction from the president," Greaves said. The issue may arise this week when Mattis visits South Korea.

Even as US lawmakers approved increased funding for the missile defence programs, they signaled some caution about the system.

The Senate Armed Services Committee said in its report on the defense policy bill that the Missile Defense Agency "has struggled" to provide some of the capabilities called for "on an accelerated schedule despite planning to do so." The panel said it wasn't confident that "these capabilities will be delivered on the required scheduled" even with the funding increase.

The panel's legislation requires the Government Accountability Office to report by Dec 1 on the Missile Defense Agency's progress in fielding the new capabilities. Greaves said via email that an additional US$270 million will be required to complete the upgrades and deliver the capabilities in fiscal years 2020 and 2021.