WASHINGTON (REUTERS) - Justice Ruth Bader Ginsburg, at 87 the US Supreme Court's oldest member, said on Friday (July 17) she is receiving chemotherapy treatment for a recurrence of cancer - the latest in a series of health issues - but indicated no intention to retire.

In a statement released by the court, Ginsburg said that a periodic scan in February, followed by a biopsy, revealed lesions on her liver and that she began her chemotherapy on May 19.

Ginsburg, the court's senior liberal justice, said the treatment is yielding positive results and that she will continue it on a biweekly basis.

"I am tolerating chemotherapy well and am encouraged by the success of my current treatment," Ginsburg said.

"I have often said I would remain a member of the Court as long as I can do the job full steam. I remain fully able to do that," Ginsburg added.

She was previously treated for pancreatic cancer in 2019 and 2009. Dr John Marshall, the chief of hematology-oncology at MedStar Georgetown University Hospital in Washington, said it appears based on the information she made public that the pancreatic cancer has spread to Ginsburg's liver.

"What I'm interpreting from everything is that this is a recurrence of pancreatic cancer and it has spread to her liver," Marshall said, who has not treated Ginsburg.

The health of Ginsburg is closely watched because a Supreme Court vacancy could give Republican President Donald Trump the opportunity to appoint a third justice to the nine-member court and move it further to the right.

The court currently has a 5-4 conservative majority including two justices appointed by Trump - Brett Kavanaugh in 2018 and Neil Gorsuch in 2017.

The average lifespan for a person with metastatic pancreatic cancer is 10 to 11 months, said Dr Diane Simeone, director of the Pancreatic Cancer Centre at NYU Langone Health in New York.

However, Ginsburg's positive response to the treatment suggests her prognosis likely will be more favourable than most, Simeone added.

Marshall said the chemotherapy drug Ginsburg is receiving, gemcitabine, is the typical treatment for pancreatic cancer that has spread and usually does not impair a person's ability to function "full throttle."

In her statement, Ginsburg said that doctors first tried immunotherapy, but it proved unsuccessful.

Ginsburg also experienced a bout with lung cancer in 2018 and colon cancer in 1999.

Ginsburg said her most recent scan on July 7 indicated "significant reduction of the liver lesions" and no new disease.

"It means the treatment is working," Marshall said, adding that usually means a "longer instead of shorter" survival. 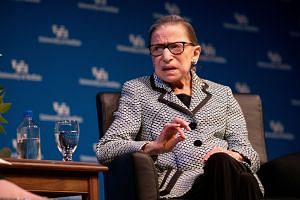 On Wednesday, Ginsburg was released from Johns Hopkins Hospital in Baltimore after treatment for a possible infection, having undergone a procedure to clean a bile duct stent that was inserted last August.

In May, she underwent non-surgical treatment for a gallstone that had caused an infection. Ginsburg said those two hospitalisations were unrelated to this cancer recurrence.

Ginsburg began receiving chemotherapy six days after the court completed hearing a number of oral arguments in cases by teleconference for the first time in its history in response to health concerns raised by the coronavirus pandemic.

During those arguments, she participated fully and asked questions of lawyers arguing the cases.

The court completed its nine-month term on July 9.

She did not publicly reveal the treatment until Friday.

"Satisfied that my treatment course is now clear, I am providing this information," Ginsburg said.

Ginsburg indicated that she has been able to keep up with her work at the court, including writing opinions in cases, throughout the treatment course.

"I will continue bi-weekly chemotherapy to keep my cancer at bay, and am able to maintain an active daily routine," she added.

Ginsburg is the second-longest serving among the current nine justices behind Clarence Thomas, having been appointed to a lifetime post on the court by president Bill Clinton in 1993.

She was the second woman ever named to the court, after Justice Sandra Day O'Connor was appointed 12 years earlier.

A trail-blazing lawyer who won gender equality cases at the Supreme Court in the 1970s, as a justice she has provided key votes in landmark rulings securing equal rights for women, expanding gay rights and safeguarding abortion rights.