WASHINGTON (REUTERS) - Ruth Bader Ginsburg, a prominent liberal who at 85 is the oldest US Supreme Court justice, was hospitalised on Thursday  (Nov 8) after falling in her office at the court the night before, fracturing three ribs, a court spokeswoman said.

Tests showed she fractured three ribs on her left side and she was admitted for observation and treatment, Arberg added. The court is not scheduled to hear its next arguments in cases until Nov 26.

Ginsburg, who has served on the court since 1993, is one of the court’s four liberals. The court’s 5-4 conservative majority was restored last month when the US Senate confirmed Republican President Donald Trump’s appointee Brett Kavanaugh after a contentious nomination process in which Kavanaugh denied a sexual assault allegation dating to the 1980s.

If Ginsburg were unable to continue serving on the court, Trump would likely move swiftly to replace her with a conservative, further shifting the court to the right. That would have major consequences for issues including abortion, the death penalty, voting rights, gay rights, business litigation and presidential powers.

As the oldest justice, Ginsburg is closely watched for any signs of deteriorating health. She has survived bouts with cancer and undergoes regular medical checkups. This week’s incident was not the first time Ginsburg has suffered an injury as a result of a fall – in June 2012, she fell at home and cracked two ribs.

Kavanaugh’s nomination hearings were rocked by university professor Christine Blasey Ford’s allegations that he sexually assaulted her in 1982, when they were both high school students. 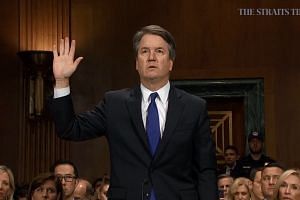 Ginsburg, who made her name as an advocate for women’s rights, voiced support for the #MeToo movement against sexual misconduct even as Kavanaugh was about to face a Senate hearing on the allegations against him, saying that unlike in her youth, “women nowadays are not silent about bad behaviour.”

Trump went to the court on Thursday for a formal ceremony welcoming Kavanaugh to the nation’s highest court. Kavanaugh was sworn in to the lifetime job last month.

The president sat along with first lady Melania Trump at the front of the marble-walled courtroom near the justices’ mahogany bench, and made no public remarks. Some leading Republicans from the US Congress, including Senate Majority Leader Mitch McConnell, attended.

Ginsburg made critical comments about Trump when he was running for president in 2016, in an unusual foray into politics by a Supreme Court justice. She later said she regretted making the remarks, saying “judges should avoid commenting on a candidate for public office.”

Ginsburg is a hero among many US liberals, sometimes called “The Notorious R.B.G” in a nickname based on the late American rapper The Notorious B.I.G.

Ginsburg has helped buttress equality rights during her time on the high court, including in sex discrimination cases, and has been a champion of abortion rights and gay rights. In 2010, after the retirement of more senior liberals, she became the court’s voice of liberalism on behalf of women, racial minorities and the poor and disenfranchised.

We are praying for Ginsburg: White House

If he were able to make a third nomination to the court to replace Ginsburg, that would increase the conservative majority to 6-3. The court’s other liberal justices are Stephen Breyer, Elena Kagan and Sonia Sotomayor. Breyer, 80, is the court’s second-oldest justice.

Kavanaugh’s Senate confirmation process convulsed the nation just weeks before Tuesday’s congressional elections in which Trump’s fellow Republicans lost control of the US House of Representatives but built on their majority in Senate, which has sole authority over judicial and Supreme Court nominations.

On Wednesday, Trump credited the fight over confirming Kavanaugh, in which Democrats strongly opposed the nominee, for the gains in the Senate.

“By expanding the Senate majority, the voters have also clearly rebuked the Senate Democrats for their handling of the Kavanaugh hearings,” he told reporters.