LONDON (THOMSON REUTERS FOUNDATION) - Super-rich individuals who pledged to give away most of their money to good causes are instead sitting on rising wealth fuelled by the "warehousing" of cash in dedicated family foundations or funds, a new study has found.

More than three quarters of a group of US billionaires who signed up to the Giving Pledge to donate most of their money saw a significant rise in wealth over the last decade, according to a report from the Institute for Policy Studies.

Its co-author urged the wealthy to follow the example of MacKenzie Scott, the ex-wife of Amazon.com's billionaire chief executive Jeff Bezos, by donating directly to charities rather than putting money into funds or foundations.

"The Giving Pledgers set out in 2010 to give away half their wealth and instead their assets have doubled," said Chuck Collins, co-author of the "Gilded Giving" report.

"By giving US$1.7 billion (S$2.3 billion) directly to 116 charities, MacKenzie Scott (Bezos) has modelled what Giving Pledge billionaires should be doing with their wealth.

"They should give it directly to working non-profit charities and not to their own perpetual family foundations or donor-advised funds."

The Giving Pledge campaign did not immediately respond to a request for comment on Wednesday (July 29).

It was set up in 2010 by US business tycoon Warren Buffett together with by Microsoft Corp co-founder Bill Gates and his wife Melinda to encourage the world's super-rich to give away most of their wealth to philanthropic causes.

Eleven of the 62 US billionaires analysed in the report have less money than in 2010, either because of aggressive charitable giving or market changes, while the remaining 51 saw "significant increases" in their net worth. 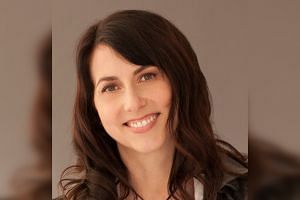 MacKenzie Scott donates US$1.7 billion of her wealth since split with Jeff Bezos

Jeff Bezos, Mark Zuckerberg and Elon Musk have made close to $159 billion this year

This is partly because many are making money so fast that it has "outstripped" their capacity to give it away, the IPS said.

But it also highlighted concerns that many are choosing to put their charitable funds into private foundations and donor-advised funds that often save on tax and may end up "warehousing" money instead of getting it to just causes.

It called for the US Congress to take action with measures including cutting the tax advantages for such organisations and forcing them to pay out more to good causes.

Most people want billionaires to help more in the eradication of poverty, found an international survey carried out by anti-poverty group Global Citizen and Dutch research agency Glocalities earlier this year.