WASHINGTON (AFP) - Did Donald Trump make secret promises to Vladimir Putin? What did the American president tell his Russian counterpart at their Helsinki summit?

US senators, distressed by the Republican billionaire's recent behaviour, will demand answers from his Secretary of State Mike Pompeo on Wednesday (July 25), when he provides the most closely watched congressional testimony of his young tenure as the nation's top diplomat.

Lawmakers have been eager for Pompeo to report back about a previous critical summit on June 12 in Singapore between Trump and North Korea's Kim Jong Un.

Their demand became all the more urgent after Helsinki, in particular the joint press conference during which Trump was seen by Republican and Democratic lawmakers alike as betraying American interests and being too conciliatory towards Putin.

"The Helsinki press conference was a sad day for our country, and everyone knows it," Senator Bob Corker, the Republican chairman of the Senate Foreign Relations Committee and an occasional Trump critic, told reporters Tuesday.

Russia will therefore be the primary focus of Pompeo's 3pm (3am Singapore time) appearance before the committee.

But Corker made it clear his panel will also grill Pompeo about his recent trip to Pyongyang, Trump's "undermining" of NATO and the alliance's principal of mutual defence, and the president's controversial tariffs which appear to be mushrooming into a trade war. 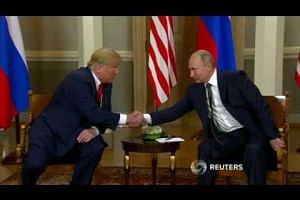 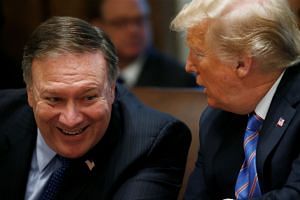 "I will testify about a lot of things including the relationship between the United States and Russia" and the "incredibly important" Trump-Putin summit, Pompeo said.

The closed-door meeting was panned by US lawmakers and observers, but Pompeo insisted it was "one I think the world will have benefited from when history is written".

More Trump-Putin history may be made in the coming months.

The White House has announced that Putin has been invited to Washington for another meeting later this year, even as Pompeo lamented that Congress was unimpressed with Trump's unprecedented determination to push back against Russia's "malign behaviour around the world."

Congress has been rattled by Trump's Helsinki performance, particularly when he appeared to accept Putin's denials rather than US intelligence conclusions that Russia interfered in the 2016 presidential election.

The criticism was so swift that Trump subsequently said he misspoke and that he believed Russia had indeed interfered in the election.

Congressional leaders in Trump's Republican Party were quick to stress that the Russian strongman was not welcome in the US Capitol.

The political turmoil has only grown in the past week, with Trump launching bellicose tweets at Iran and doubling down on his tariff plans.

With Moscow stressing that "agreements" had been reached between the two leaders over the situation in Syria, the content of their two-hour conversation with no one else but their interpreters present has been the subject of conjecture.

The US State Department said three "modest proposals" have emerged from the summit: a high-level business leaders' working group; a council of US and Russian political experts, diplomats and military officials; and discussions between the two presidents' national security staffs.

The Democratic opposition has launched withering attacks on Trump, demanding additional transparency and going so far as to haul the president's interpreter before Congress.

"The American people deserve answers about what they agreed to in private," said Senator Robert Menendez, top Democrat on the committee, who is working on a bipartisan bill to strengthen sanctions on Russia.

Corker agreed, stressing he hoped Pompeo was "in the loop" and briefed on the details of the Helsinki tete-a-tete.

"I'd be disappointed to find out that he wasn't," Corker said.