WASHINGTON (AFP, REUTERS) - The United States on Thursday (Aug 23) accused China of destabilising cross-Strait relations following the announcement this week that El Salvador would end diplomatic ties with Taipei in favour of Beijing.

Self-ruled Taiwan now has formal relations with only 17 countries, almost all of them small and less developed nations in Central America and the Pacific, including Belize and Nauru.

Taiwan President Tsai Ing-wen this week vowed to fight China’s “increasingly out of control” behaviour as El Salvador became the third country to switch allegiance to Beijing this year. China views Taiwan as a wayward province, with no right to state-to-state ties.

In a statement likely to inflame already strained relations with Beijing, the White House said El Salvador’s government had made the decision “in a non-transparent fashion only months before they leave office”.

“The El Salvadoran government’s receptiveness to China’s apparent interference in the domestic politics of a Western Hemisphere country is of grave concern to the United States, and will result in a reevaluation of our relationship with El Salvador,” it said.

Countries wanting to open or expand ties with China to get state-directed investment for short-term economic growth and infrastructure may be disappointed in the long run, the White House said.

“Around the world, governments are waking up to the fact that China’s economic inducements facilitate economic dependency and domination, not partnership,” it said.

Taiwan has accused China of luring its friends away with offers of generous aid packages. China denies that.  There was no immediate response in Taipei or Beijing to the White House statement.

Washington does not have diplomatic relations with Taipei, but is the democratic island’s main arms supplier and strongest international backer.

The White House statement came as a leading Republican senator said Thursday he is preparing legislation to discourage Taiwan's few remaining allies from switching their allegiance to China, after El Salvador became the third country this year to move towards Beijing.

Senator Cory Gardner, chairman of the Foreign Relations Committee's Asia subcommittee, told Reuters he will introduce within a few days a measure encouraging countries to stick with Taipei.

Among other things, he said the measure would authorise the State Department to take action such as downgrading relations or altering foreign assistance to discourage decisions seen as adverse for Taiwan.

"The Taipei Act of 2018 would give greater tools and directions to the State Department in making sure we are as strong a voice as possible for Taiwan," Gardner told Reuters in a telephone interview.

It would require a US strategy to engage with governments around the world to support Taiwan's diplomatic recognition or unofficial ties. It also would authorise State to downgrade US relations, or suspend or alter US foreign assistance, including foreign military financing, to governments that take adversarial actions with regard to Taiwan.

He stressed that the Bill would not mandate action against countries that have chosen diplomatic relations with Beijing.

"This is a permissive Bill," he said. "It's something that gives one more tool in the bundle of tools to address Chinese bullying." 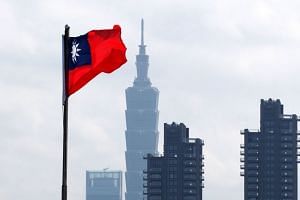 On Tuesday, the State Department said the United States was "deeply disappointed" by El Salvador's decision and was reviewing its relationship with San Salvador, without elaborating further.

Several members of Congress, who see Beijing as a threat to US security and international influence, have expressed frustration with what they see as President Donald Trump's failure to adopt a strategy for Taiwan.

A legislative effort to boost Taiwan, which would anger China, comes as Washington and Beijing have escalated an acrimonious trade war. On Thursday, the world's two biggest economies implemented punitive 25 per cent tariffs on US$16 billion worth of each other's goods.

Gardner met Taiwanese President Tsai Ing-wen last week about what Congress could do to support Taiwan.

The senator said he had spoken to several Democratic senators, hoping to build bipartisan backing necessary for his Bill to pass the chamber. He said he also planned to work with members of the House of Representatives and the White House.

China has claimed sovereignty over Taiwan since the 1940s, although both sides have been self-ruled since then. Beijing considers Taiwan a wayward province of "one China," ineligible for state-to-state relations, and has never renounced the use of force to bring the island under its control.

China’s hostility to Taiwan has grown since Tsai’s election two years ago as Beijing fears she wishes to push for the island’s formal independence, a red line for China. She says she wants to maintain the status quo but will defend Taiwan’s democracy.

China has stepped up efforts to restrict Taiwan’s international presence, including ordering foreign airlines to list Taiwan as part of China on their websites, and has been conducting regular military drills near the island.

The White House added that the United States will continue to oppose China’s “destabilisation of the cross-Strait relationship and political interference in the Western Hemisphere”.

Speaking at a meeting with President Tsai at the Presidential Office in Taipei on Thursday, Brent Christensen was quoted by Central News Agency as saying: "China's unilateral efforts to alter the status quo are unhelpful and undermine the framework that has enabled peace, stability and development in the region for decades."

He said Taiwan is a reliable partner and important player in the Indo-Pacific region and the US-Taiwan relationship is based on shared interests and values.

"We rely on Taiwan to promote regional peace and stability," he said, adding that the two sides can stand together to protect "our freedom, democracy and our future".