WASHINGTON (NYTIMES) - British foreign minister Jeremy Hunt arrived in Washington last week for a whirlwind of meetings dominated by a critical question: Should Britain risk its relationship with Beijing and agree to the Trump administration's request to ban Huawei, China's leading telecommunications producer, from building its next-generation computer and phone networks?

Britain is not the only United States ally feeling the heat.

In Poland, officials are also under pressure from the US to bar Huawei from building its fifth generation, or 5G, network. Trump officials suggested that future deployments of US troops - including the prospect of a permanent base labelled "Fort Trump" - could hinge on Poland's decision.

And a delegation of US officials showed up this spring in Germany, where most of Europe's giant fibre-optic lines connect and Huawei wants to build the switches that make the system hum. Their message: Any economic benefit of using cheaper Chinese telecom equipment is outweighed by the security threat to the Nato alliance.

During the past year, the US has embarked on a stealthy, occasionally threatening, global campaign to prevent Huawei and other Chinese firms from participating in the most dramatic remaking of the plumbing that controls the Internet since it sputtered into being, in pieces, 35 years ago.

The administration contends that the world is engaged in a new arms race - one that involves technology, rather than conventional weaponry, but poses just as much danger to US national security. In an age when the most powerful weapons, short of nuclear arms, are cyber-controlled, whichever country dominates 5G will gain an economic, intelligence and military edge for much of this century.

The transition to 5G - already beginning in prototype systems in cities from Dallas to Atlanta - is likely to be more revolutionary than evolutionary. What consumers will notice first is that the network is faster - data should download almost instantly, even over cellphone networks.

It is the first network built to serve the sensors, robots, autonomous vehicles and other devices that will continuously feed one another vast amounts of data, allowing factories, construction sites and even whole cities to be run with less moment-to-moment human intervention. It will also enable greater use of virtual reality and artificial intelligence tools.

But what is good for consumers is also good for intelligence services and cyber attackers. The 5G system is a physical network of switches and routers. But it is more reliant on layers of complex software that are far more adaptable, and constantly updating, in ways invisible to users - much as an iPhone automatically updates while charging overnight. That means whoever controls the networks controls the information flow - and may be able to change, reroute or copy data without users' knowledge.

In interviews with current and former senior US government officials, intelligence officers and top telecommunications executives, it is clear that the potential of 5G has created a zero-sum calculus in the Trump White House - a conviction that there must be a single winner in this arms race, and the loser must be banished.

For months, the White House has been drafting an executive order, expected in the coming weeks, that would effectively ban US companies from using Chinese-origin equipment in critical telecommunications networks. That goes far beyond the existing rules, which ban such equipment only from government networks. 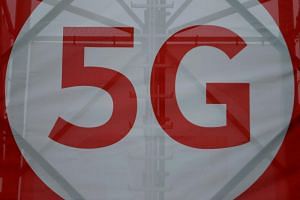 Stakes upped for US and China in 5G race

Stakes up for US, China in 5G race amid trade war

Nervousness about Chinese technology has long existed in the US, fuelled by the fear that the Chinese could insert a "back door" into telecom and computing networks that would allow Chinese security services to intercept military, government and corporate communications. And Chinese cyber intrusions of US companies and government entities have occurred repeatedly, including by hackers suspected of working on behalf of China's Ministry of State Security.

But the concern has taken on more urgency as countries around the world begin deciding which equipment providers will build their 5G networks.

US officials say the old process of looking for "back doors" in equipment and software made by Chinese companies is the wrong approach, as is searching for ties between specific executives and the Chinese government.

The bigger issue, they argue, is the increasingly authoritarian nature of the Chinese government, the fading line between independent business and the state, and new laws that will give Beijing the power to look into, or maybe even take over, networks that companies like Huawei have helped build and maintain.

"It's important to remember that Chinese company relationships with the Chinese government aren't like private sector company relationships with governments in the West," said Mr William Evanina, director of the US National Counterintelligence and Security Centre. "China's 2017 National Intelligence Law requires Chinese companies to support, provide assistance and cooperate in China's national intelligence work, wherever they operate."

The White House's focus on Huawei coincides with the Trump administration's broader crackdown on China, which has involved sweeping tariffs on Chinese goods, investment restrictions and the indictments of several Chinese nationals accused of hacking and cyber espionage. President Donald Trump has accused China of "ripping off our country" and plotting to grow stronger at America's expense.

Mr Trump's views, combined with a lack of hard evidence implicating Huawei in any espionage, have prompted some countries to question whether the US campaign is really about national security or if it is aimed at preventing China from gaining a competitive edge.

"President Trump has identified overcoming this economic problem as critical, not simply to right the balance economically, to make China play by the rules everybody else plays by, but to prevent an imbalance in political/military power in the future as well," Mr John Bolton, Mr Trump's national security adviser, told The Washington Times last Friday. "The two aspects are very closely tied together in his mind."