WASHINGTON (AFP) - United States sanctions on Venezuela will continue, Vice-President Mike Pence said on Saturday (May 26), despite the release of an American and his wife from a Venezuelan jail.

"Very glad that Josh Holt is now back home with his family - where he has always belonged. Sanctions continue until democracy returns to Venezuela," Mr Pence said in a tweet.

He was commenting after Mr Holt, 26, and his wife, Ms Thamara Caleno, landed in Washington after Venezuelan President Nicolas Maduro ordered their release after two years.

It was a "gesture" aimed at promoting dialogue between Caracas and Washington, Venezuelan Communications Minister Jorge Rodriguez told reporters in Caracas.

Mr Holt, a 26-year-old Mormon missionary from Utah, had travelled to Venezuela in June 2016 to marry Thamara, whom he had met on the Internet.

Shortly after they wed, however, the couple was arrested by the Venezuelan intelligence service Sebin, and accused of possessing weapons and plotting to destabilise the Maduro government.

After a May 20 election which Washington rejected as a "sham", US President Donald Trump tightened pre-existing sanctions against Mr Maduro's regime.

.@POTUS stood strong for freedom in Venezuela & Joshua Holt is home! Kudos to @senorrinhatch, @SenMikeLee, @RepMiaLove, @SenBobCorker & @StateDept on a job well done. The U.S. will continue pressure until freedom is restored for all the people of Venezuela! https://t.co/8iAdlN2dKa 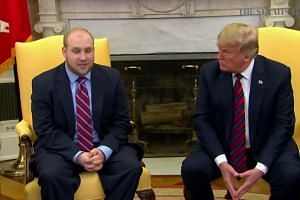 Senior US administration officials said the instruments had been used to garner much-needed revenue for the cash-starved regime.

Washington has previously imposed sanctions on Mr Maduro and his senior aides, and banned US entities from buying any more debt from Caracas or state oil company PDVSA.

Mr Maduro has insisted Venezuela is the victim of an "economic war" waged by the conservative opposition and external powers, including the United States, aimed at toppling him.

Most economists attribute the oil-rich country's economic collapse to years of mismanagement, corruption and a period of sharply lower oil prices.