WASHINGTON (REUTERS) - When the remains of Americans handed over by North Korea arrive in Hawaii on Wednesday (Aug 1), the US military will begin a painstaking identification process that experts said could take from three days to two decades to complete.

The 55 boxes, draped in the blue and white flag of the United Nations, are each small enough to be carried in one person's arms.

They bear not only the remains thought to be of missing servicemen from the 1950-53 Korean War, but also a message of good faith made by North Korean leader Kim Jong Un at his summit with US President Donald Trump in June.

The remains within each box may not be those of a single person and are likely fragments of bones, said Paul Cole, an expert on recovery of soldiers missing in action and prisoners of war, who worked as a visiting scientific fellow at Hawaii's Central Identification Laboratory where the boxes will land.

The commingling of remains reflects the violent impacts to which human beings are subjected in war.

At the laboratory, work will be done to determine if the remains are human. Then experts will count the bones and come up with a minimum number of individuals that could be in the shipment.

Each bone, or fragment, offers a clue. The femur indicates height, the pelvis age, the face and skull national origin. The clavicle and teeth offer some of the best comparison to the personnel file the Department of Defense keeps of missing servicemen, said Cole, author of the book "POW/MIA Accounting: Searching for America's Missing Servicemen in the Soviet Union." 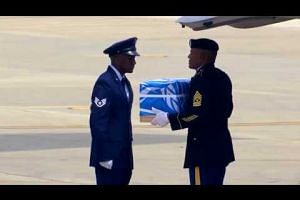 North Korea hands over remains of US war dead

When bones meet the size requirement, the lab will cut and send a piece to the Armed Forces DNA Identification Laboratory, where it will be analysed and compared to family reference samples.

If the bone is too small, DNA analysis cannot be done. Federal law prohibits the destruction of evidence in testing, and DNA analysis destroys the bone, said Cole.

Those kinds of challenges can drag out the process by many years.

"Problems such as inability to get DNA from bones and lack of a DNA reference sample from the family can be major stumbling blocks," said Chuck Prichard, director of public affairs for the Defense POW/MIA Personnel Accounting Agency, the US military's main unit for finding and identifying missing members.

The identification process does not prove the bones belong to one person, but rather that they could not belong to anybody else, Cole said. Sometimes all families receive are fragments small enough to fit in the palm of a hand.

Still, the mission is loaded with expectations and political weight.

Trump last week thanked Kim for keeping the promise he made as part of their talks about North Korea's denuclearisation.

The US State Department said this month it would resume joint field activities to search for the remains of Americans missing from the war. A total of 5,300 American servicemen are believed to have been lost in what is now North Korea.

Gail Embery first found out when she was about 10 years old that her father, Sergeant Coleman Edwards, had gone missing in Korea. She is hopeful that her father's remains are among those arriving on Wednesday.

"I always knew that I would have to find my father. I always knew it in my heart," Embery said. "I'm 73 now, and I am still looking."