WASHINGTON (AFP) - The US Securities and Exchange Commission on Thursday (Sept 27) charged Tesla CEO Elon Musk with securities fraud, alleging he had misled investors last month in tweets about taking the company private.

Musk tweeted on Aug 7 that he had "funding secured" to privatise the electric automaker at US$420 a share, causing a brief spike in Tesla's share price.

The SEC said Musk's statements on Twitter were "false and misleading" and that he had never discussed the plans with company officials or potential funders.

Musk later said he later decided against the plan.

But Musk quickly rejected the SEC's allegations on Thursday, calling the charges baseless and vowing to defend himself.

"This unjustified action by the SEC leaves me deeply saddened and disappointed," Musk said in a statement.

"I have always taken action in the best interests of truth, transparency and investors. Integrity is the most important value in my life and the facts will show I never compromised this in any way." 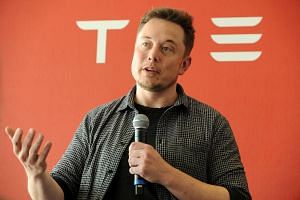 The SEC's charges pose a potentially devastating threat to Musk's future as an entrepreneur, as the agency is seeking fines and the return of ill-gotten gains, as well as potentially barring him from ever serving as an officer or board member of a publicly-traded company.

'AS FIRM AS IT GETS'

But Stephanie Avakian, the SEC's co-director of enforcement, told reporters that Musk knew his statements lacked any basis in fact.

The Tesla CEO "had not even discussed key deal terms, including price with any potential source of funding," she said at a news conference.

The charges were a fresh blow to the embattled silicon valley entrepreneur and his company, which has been buffeted in recent months, struggling to reach production targets.

Musk has baffled investors with emotional and seemingly erratic media appearances, including one where he appeared to smoke marijuana, and a public battle with a rescuer who helped save a group of boys trapped in a cave in Thailand.

"The investor relations department told analysts that there was a quote firm offer, and that quote - the offer is as firm as it gets," Peikin said.

Tesla's share price closed up nearly 11 per cent the day of the tweet - which caused the Nasdaq to suspend trading for an hour and a half.

The company's fortunes on Wall Street worsened considerably Thursday, sinking about 10 per cent in after-hours trading to US$277.50, down 25 per cent since the day of the go-private tweet.