WASHINGTON (AFP) - President Donald Trump said Monday (Oct 22) that his decision to withdraw from a decades-old atomic accord with Russia was also driven by a need to respond to China's nuclear build-up.

"Until people come to their senses, we will build it up," Trump told reporters Monday at the White House, referring to the US nuclear arsenal.

Beijing is not a signatory to the Intermediate-Range Nuclear Forces Treaty (INF).

China for its part Monday called on the United States to "think twice" about its decision to ditch a Cold War-era nuclear weapons treaty with Russia.

"It needs to be emphasised that it is completely wrong to bring up China when talking about withdrawal from the treaty," said Chinese foreign ministry spokeswoman Hua Chunying.

The landmark treaty was signed by Ronald Reagan and Mikhail Gorbachev in 1987 and led to nearly 2,700 short- and medium-range missiles being eliminated. 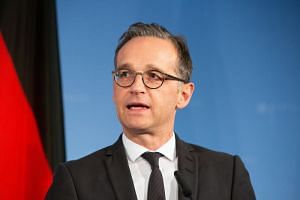 It put an end to a mini-arms race in the 1980s triggered by the Soviet Union's deployment of SS-20 nuclear missiles targeting Western European capitals.

It's Russia that has been singled out for violating the accord. At issue is Moscow's new 9M729 ground-based missile system, which Washington says has a reach that exceeds 500km - a claim the Kremlin denies.

Trump did not say whether a new treaty could be negotiated, but he has repeatedly in recent days pointed the finger of blame at both Moscow and Beijing, saying the US would develop its own weapons until they stop.

For several years, Washington has accused Russia of violating the INF Treaty, which banned an entire class of nuclear and conventional missiles with ranges of 500 to 5,500km.

US National Security Advisor John Bolton was dispatched to Moscow for emergency talks, where he said there would be wider consultations with "other" participants.

He told Moscow's Echo radio that "friends" in Europe and Asia could be involved.

For John Lee, a senior fellow at the conservative Hudson Institute think tank who specializes in defense strategy, "the situation vis-a-vis China, uninhibited by any agreement, is very different and far more pressing" than that of Russia.

Mattis 'completely' in line with Trump

About 95 per cent of the missiles available to the Chinese People's Liberation Army Rocket Force would violate the INF Treaty if Beijing were a signatory, Lee charges.

On the issue, the White House and the Pentagon are on the same wavelength.

In its latest Nuclear Posture Review published in February 2018, the Pentagon said: "In the nuclear context, the most significant Russian violation involves a system banned" by the INF Treaty.

But the document also refers to missiles developed by China, which has in recent years sought to assert its military supremacy in Asia.

At the start of October, Mattis put Russia on notice that its continued alleged violation of the arms treaty would not be ignored.

"Russia must return to compliance with the INF Treaty or the US will need to respond to its cavalier disregard for the treaty's specific limits," Mattis said after a meeting of NATO defense ministers in Brussels.

"Make no mistake - the current situation with Russia in blatant violation of this treaty is untenable."

In a sign that the Pentagon was preparing for an INF withdrawal for months, the new Missile Defence Review - US policy on ballistic missiles - has not yet been published, despite its expected arrival in early 2018.

For months, the Defense Department has repeatedly said the policy document will be available "in a few weeks."

When asked about the MDR, Manning said he had no precise publication date to announced, but he highlighted that "all factors will be taken into account before the Missile Defense Review is released."