WASHINGTON (AFP) - US President Barack Obama's eldest daughter Malia will attend Harvard University in 2017 after taking a year off from her studies, the White House said Sunday.

The 17-year-old will be following in the footsteps of her parents, both of whom went to Harvard Law School.

The news came in a statement from the office of First Lady Michelle Obama, which did not specify what Malia will do during her break after graduating from high school.

Students often use a "gap year" to travel, work or otherwise gain experience outside the classroom. 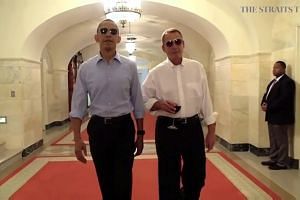 Malia Obama will attend Harvard starting in the autumn of 2017 and is scheduled to graduate in 2021.

Where Malia would go to college has been a subject of much speculation and interest in Washington.

As part of her college search she visited several Ivy League and liberal arts schools on the East Coast, the New York Times reported.

The Obamas have said they will keep living in Washington after the president leaves office in January, so that their younger daughter, Sasha, can finish her high school studies here.