The work to preserve the North Atlantic Treaty Organisation agreement, which is usually subject to intense eleventh-hour negotiations, came just weeks after Trump refused to sign off on a communiqué from the June meeting of the Group of 7 in Canada.

The rushed machinations to get the policy done, as demanded by John Bolton, the national security adviser, have not been previously reported. Described by European diplomats and US officials, the efforts are a sign of the lengths to which the president's top advisers will go to protect a key and long-standing international alliance from Trump's unpredictable antipathy.

Allied ambassadors said the US officials' plan worked - to a degree.

Trump did almost blow up the two-day meeting in Brussels that began on July 11. He issued a vague threat that the United States could go its own way if allies resisted his demands for additional military spending. After the gathering, he also questioned a pillar of the alliance: that an attack on one Nato country is an attack on all.

But the approval of the communiqué - renamed for the meeting as a declaration - was critical for the alliance. It ensured that, despite Trump's rhetorical fireworks, Nato diplomats could push through initiatives, including critical Pentagon priorities to improve allied defences against Russia.

"The president's national security team did a good job of salvaging a minimally successful outcome to the Nato summit," said James G. Stavridis, a retired four-star admiral who also once served as the supreme allied commander for Europe.

But, he added, "it is unfortunate that the president's apparent personal animus continues to create friction in an alliance that has stood the test of time." In June, weeks before the meeting, Bolton sent his demand to Brussels through Kay Bailey Hutchison, the US ambassador to Nato. He wanted the Nato communiqué to be completed early, before the president left for Europe, according to five senior US and European officials familiar with the discussions but described them on the condition of anonymity to avoid angering the White House.

Nato's secretary-general, Jens Stoltenberg, reinforced Bolton's directive during a gathering of the ambassadors on July 4. The usual infighting over the summit agreement, he said, had to be dropped.

He asked the delegations to finish their work by July 6 at 10pm Brussels time.

Fearful of a repeat of the G-7 disaster - in which Trump refused to sign off on the joint communiqué, escalated a trade war and publicly derided Prime Minister Justin Trudeau of Canada - the emissaries from the Nato countries all agreed.

Two senior European officials said Secretary of State Mike Pompeo and Defence Secretary Jim Mattis were also keen to avoid another confrontation similar to the G-7, and the Nato declaration was completed days before leaders set foot in Brussels. 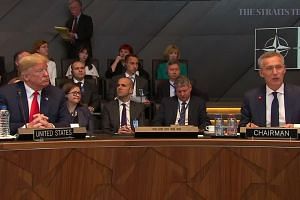 Nato leaders gather for summit, united against Russia but divided by Trump

Nato's threats from within: Its anti-democratic members

Against Russian objections, the military alliance would formally invite Macedonia to join. It would establish an Atlantic Command post, hosted by the United States in Norfolk, Virginia, to coordinate a swift alliance response in the event of, for instance, a war in Europe between Russia and Nato allies.

And, most important, allies pledged to build up their militaries and provide 30 mechanised battalions, 30 air squadrons and 30 combat vessels, all ready to use in 30 days or less, by 2020 - a force to quickly respond to any attack on an alliance member.

Jamie Shea, a Nato deputy assistant secretary general, called the declaration "the most substantive" agreement that the alliance had put out in years. But its success, according to US and European officials, lies in the feverish work before the summit to keep it away from Trump.

"When you read the communiqué, and take into account the work that took place, this is one of the meatiest Nato summits that I can recall," said Deborah Lee James, a former secretary of the Air Force in the Obama administration.

Eric Pahon, a Pentagon spokesman, said in an email on Thursday (Aug 9) that the summit was "extraordinarily successful, and the outcomes are now strengthening the alliance and trans-Atlantic security."

Approving the communiqué, even rebranded as a declaration, was critical to moving the alliance forward over the coming years.

The new agreement has given US national security officials the ability to assure the public, and skittish allies, that the country's commitment to the alliance remains intact - no matter any anti-Nato tweets or interviews or statements from Trump.

The week after the summit, during an interview with Tucker Carlson of Fox News, Trump questioned whether the United States would defend Montenegro, which is the newest Nato member state and has a fraught relationship with Russia. His national security team deflected questions and criticism by pointing to the Nato declaration as the true sign of American resolve.

The "Four 30s" initiative - the plan for 30 battalions, air squadrons and combat warships ready to respond within 30 days - was pushed hard by Mattis. It is viewed by the Pentagon as critical to getting America's Nato allies more fit and able to react quickly to threats as they develop.

If successful, the readiness initiative will funnel new European military spending into building up allied units. That will help forces more quickly deploy to a conflict - a current shortfall the Pentagon and US military leaders have highlighted. Many European members of Nato thought Mattis was being too ambitious in pushing it.

But in the rush to get the agreement done before the meeting, the Four 30s initiative was approved.