WASHINGTON (AFP) - A US police officer involved in the fatal shooting of African American Breonna Taylor as she slept at home is to be fired, Louisville's mayor announced on Friday (June 19) in a significant step in a case that has fuelled racial tensions nationwide.

"Unfortunately, due to a provision in state law that I very much would like to see changed, both the chief and I are precluded from talking about what brought us to this moment, or even the timing of this decision," the mayor said.

Taylor, a 26-year-old emergency health worker, died March 13 when police officers operating under a no-knock warrant burst into her apartment, firing at least eight bullets at Taylor as she and her boyfriend were in bed.

Taylor's boyfriend took out his licensed gun and fired it when he heard the plainclothes police attempting to break down the door, investigators reportedly said.

Officers had the wrong address and used a battering ram to enter the Louisville apartment without warning.

They were searching for a suspect who was already in custody, Taylor's family's lawyer Benjamin Crump has said.

The case helped trigger fresh waves of anger in the United States over racial injustice and police brutality.

Those protests expanded dramatically after the May 25 killing of George Floyd, an unarmed black man who died after a white police officer pinned his knee to Floyd's neck for more than eight minutes.

Senator Kamala Harris said the announcement was "a start, but not good enough."

"We cannot rest until all the officers involved in Breonna Taylor's murder are charged," she tweeted. 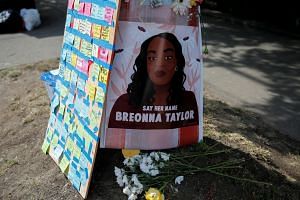 "I am alarmed and stunned you used deadly force in this fashion," Schroeder wrote in the letter, according to the Louisville Courier-Journal.

"Your conduct demands your termination," the chief added.