WASHINGTON (AFP) - US authorities are considering eliminating passenger screening at small and mid-size airports across the country, a report said on Wednesday (Aug 1), creating concern among terrorism experts.

The Transportation Security Administration (TSA), which was created in the aftermath of the Sept 11, 2001, attacks, is looking at a proposal to cut screening at more than 150 airports serving aircraft with 60 seats or fewer, according to agency officials and documents cited by CNN.

Travellers and luggage would instead be screened when their flights connect to higher-volume airports.

In a statement reacting to the report, the TSA's assistant administrator for public affairs, Mr Michael Bilello, said, "there has been no decision to eliminate passenger screening at any federalised US airport," but did not say the issue was not under consideration.

"Every year as part of the federal budget process, TSA is asked to discuss potential operational efficiencies - this year is no different," the statement said.

"Any potential operational changes to better allocate limited taxpayer resources are simply part of pre-decisional discussions and deliberations and would not take place without a risk assessment to ensure the security of the aviation system."

Internal memos reported by CNN suggest the move could save US$115 million (S$156.66 million) annually, which could be used to boost security at bigger airports, where risks are deemed to be much greater.

But it would also carry a "small (non-zero) undesirable increase in risk related to additional adversary opportunity", a document said. 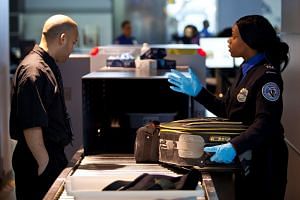 CNN's terrorism analyst Paul Cruikshank said militant groups like Al-Qaeda and the Islamic State in Iraq and Syria (ISIS) group "still regard aviation as a priority target - that includes aircraft where you have fewer than 60 people on board".

The move would mark a reversal of a trend toward enhanced security measures since the TSA's inception in 2001.

In April, the agency announced travellers would be asked to remove material from their bags that made it hard to read X-rays, including food items.

Last year, the US banned laptops and larger electronics from cabins on flights from certain Middle East hubs.