NEW YORK (NYTIMES, AFP) – Marina Krim leaned forward on the witness stand of a Manhattan courtroom on Friday (March 2) and placed her forehead in the palm of her right hand, the pain of the proceedings weighing on her.

For a second day, she testified at the trial of her former nanny, Yoselyn Ortega, 55, who stabbed to death two of Krim’s children, Leo, two, and Lucia “Lulu”, six, and who is charged with murder.

Under cross-examination by Ortega’s lawyer, Krim said that Ortega had been acting strangely in the months before the killing on Oct 25, 2012.

But Krim said she had attributed the behaviour to Ortega’s struggling with providing for her own son. Hehad recently moved from the Dominican Republic to live with her, and she was about to lose her apartment.

“I knew that she was going through a rough period,” Krim told the defence lawyer, Valerie Van Leer-Greenberg. “She was not quite, she was just not her normal self.”

Krim grew irritated as Van Leer-Greenberg pressed her about the nanny’s schedule and responsibilities, their interactions and Ortega’s behaviour in the days, weeks and months before the crime.

Ortega, 55, is charged with first-degree murder and second-degree murder, and her trial, in state Supreme Court in Manhattan, is expected to last several weeks. Ortega, who has pleaded not guilty by reason of insanity, faces life in prison if convicted; if acquitted on an insanity defence, she could be committed to a psychiatric facility.

In opening statements on Thursday, prosecutors said Ortega resented Krim and that the children were killed as a calculated act of spite against her.

On Thursday, in her first day of testimony, Krim recounted how she had discovered the horrific scene in the family’s apartment on West 75th Street after learning that Lulu had never made it to dance class.

She found her children stacked in a bathtub with their eyes open and blood all over their bodies, then watched in horror with her three-year-old daughter, Nessie, as Ortega plunged a knife into her own neck.

On Friday, Thomas Brown, a security guard who was working in the Krims’ apartment building, said that Ortega had never spoken to him before the day she killed the children.

That day, as he was preparing for his shift to end at 4pm, she approached his desk in the lobby and asked in broken English whether Krim was home. He told her he had just seen Krim leave with Nessie. Ortega then went to the elevator with Lulu and Leo in tow, and he never saw them again.

“It was a shock to me that she said anything,” he said.

Krim returned to the apartment around 5.10pm and searched for her children.

Glenn Looby, who had replaced Thomas, was in the lobby when she called from a landing outside the family’s apartment asking if he had seen her children. When he said he had not, she went back up to the apartment. A few minutes later, he said, she came out screaming about her children being murdered and he called 911.

Over the 2½ years Ortega worked for the family, Krim said on Friday, there were other times when she thought Ortega was acting oddly. She had considered firing the nanny, but ultimately decided against it.

“There was nothing to fire her over,” she said. “She was on time every day. She was interacting with the kids. She was doing most of her job.” 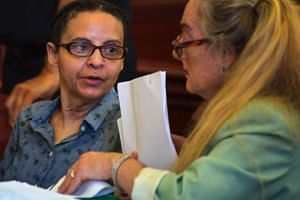 After the cross-examination had concluded, Stuart Silberg, an assistant district attorney, asked Krim if she thought she had missed any warning signs. Krim asked for a break.

She returned, and finished her testimony describing how Ortega had reacted to a pregnancy that ended in miscarriage.

When Van Leer-Greenberg objected to Krim’s testimony about the miscarriage, Krim shouted, “Let me finish telling my story!”

Ortega, she said, had been jubilant when told the Krims were expecting a fourth child. But when she was told of the miscarriage months later, she showed no sympathy.

“She didn’t say anything,” Krim said. “She didn’t give me a hug. She gave me no emotion at all. She actually looked mad at me.”

As Krim spoke, Ortega, sitting a few feet away, looked down at her lap and shook her head.

Soon, Krim told Silberg that she had enough. As she left the witness stand, escorted by court officers, she raged at Ortega.

Justice Gregory Carro reminded jurors that the mother’s outburst was not evidence.

When the prosecution tried to move on, Krim left the room shouting and did not return, leading the prosecuting lawyers to call another witness in what is expected to be a three-month trial.

Krim and her husband Kevin have had two more children since Lucia, known to her family as Lulu, and Leo were killed. They also founded a foundation that nurtures creativity among children facing adversity.

The killings served as the inspiration for Chanson Douce – a best-selling novel that earned author Leila Slimani France’s top literary prize, the Goncourt, in 2016.

The novel, set in Paris, was translated as Lullaby in Britain and in the United States as The Perfect Nanny, where it was less commercially successful than in Europe.