WASHINGTON (WASHINGTON POST) - Acting director of national intelligence Joseph Maguire defended his decision not to share immediately  with Congress an extraordinary complaint by an intelligence community whistle-blower alleging that President Donald Trump used his office to solicit interference by a foreign country in the 2020 US elections.

Maguire told members of the House Intelligence Committee that he supported the right of the whistleblower, whose complaint helped touch an impeachment inquiry, to raise concerns with an intelligence community watchdog.

But much of the complaint concerned communications the president had with a foreign leader, Ukrainian President Volodymyr Zelenskiy, and may have been covered by executive privilege, he said. That is a privilege, Maguire said, that he is not empowered to waive.

Maguire said that the White House, in the end, did not assert privilege over the complaint or the phone call it describes, which took place on July 25.

Maguire said his office first sought advice from the White House Counsel and then the Justice Department’s Office of Legal Counsel to ask if the complaint might be covered by executive privilege.

Democratic Representative Adam Schiff, the committee chairman, strongly questioned Maguire on why he had sought advice from the White House when the president was subject of the complaint.

“It just seemed prudent to be able to check” on the issue, Maguire said.

Maguire said officials at the OLC determined that executive privilege might apply to the complaint, but they didn’t provide an immediate decision. While officials considered the matter, Maguire said, he held off from notifying Congress.

Maguire seemed at pains to emphasize that he was not authorized to decide on his own whether to provide the complaint. He called the matter extraordinary and essentially described his office as operating in uncharted waters, because the subject of the complaint is the president.

An unclassified version of the complaint was publicly released shortly before Maguire’s appearance on Capitol Hill.

Maguire expressed to members of the House Intelligence Committee “my support for the whistleblower,” who he said had followed regular procedures for raising a concern with the inspector general. He said both the whistleblower and the inspector-general “have acted in good faith throughout. I have every reason to believe that they have done everything by the book and followed the law.”

The inspector-general ultimately informed Congress about the existence of the complaint, but not its substance, a decision that Maguire said he supported.

Schiff said that by coming forward, the whistle-blower “has shown more dedication to country... than the president himself.” 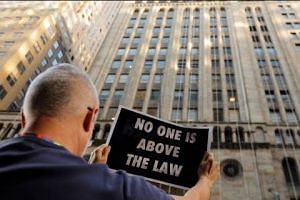 If impeachment process fizzles, Trump may go into 2020 election stronger

Republican Representative Devin Nunes derided the complaint as “fake news” and accused Democrats and journalists of a conspiracy to gin up baseless allegations against Trump. He called the complaint and press coverage of it an “information warfare operation” against the president.

Maguire had threatened to resign over concerns that the White House might attempt to force him to stonewall Congress when he testified, according to current and former US officials familiar with the matter.

The officials said that Maguire, who was thrust into the top intelligence post last month, warned the White House that he was not willing to withhold information from Congress.

Maguire denied that he had contemplated resigning.

In a statement, he said that “at no time have I considered resigning my position since assuming this role on Aug 16, 2019. I have never quit anything in my life, and I am not going to start now. I am committed to leading the intelligence community to address the diverse and complex threats facing our nation.”

On Wednesday, the Trump administration released a memorandum detailing a thirty-minute phone call that Trump had with Zelenskiy. It revealed that Trump told his Ukrainian counterpart to work with Attorney-General William Barr to investigate Democratic presidential candidate Joe Biden and offered to meet with the foreign leader at the White House after he promised to conduct such an inquiry.

Congress’ efforts to obtain the whistleblower complaint have put Maguire in the middle of a struggle between the legislative and executive branches of government.

The retired admiral, who previously ran the National Counterterrorism Center, has at times expressed his displeasure with the White House counsel and others that he felt put him in an untenable position – denying material to Congress by relying on a claim that the whistleblower’s complaint didn’t fall within the jurisdiction of the director of the intelligence community, according to current and former officials who spoke on condition of anonymity because of the sensitivity of the matter.

Maguire has been the target of harsh criticism by congressional Democrats for not handing over the complaint, as they and some legal experts have said the law requires.

Officials said that Maguire had been pursuing an opportunity to speak to Congress and defend his actions and integrity.

“I want to make clear that I have upheld my responsibility to follow the law every step of the way,” Maguire said in a statement Tuesday evening.

“I am committed to protecting whistleblowers and ensuring every complaint is handled appropriately,” Maguire added.

“I look forward to continuing to work with the Administration and Congress to find a resolution regarding this important matter.”