WASHINGTON (NYTIMES) - The US Justice Department and the FBI are investigating Cambridge Analytica, the now-defunct political data firm, and have sought to question former employees and banks that handled its business, according to a US official and other people familiar with the inquiry.

Prosecutors have questioned potential witnesses, telling them there is an open investigation into Cambridge Analytica - which worked on President Donald Trump's election and other Republican campaigns in 2016 - and "associated US persons".

But the prosecutors provided few other details, and the inquiry appears to be in its early stages, with investigators seeking an overview of the company and its business practices.

The investigation compounds the woes of a firm that has come under intense scrutiny from lawmakers and regulators in the United States and Britain since The New York Times and Observer in London reported in March that it had harvested private data from more than 50 million Facebook profiles, and that it may have violated US election laws.

Earlier this month, Cambridge Analytica announced it would shut down and declare bankruptcy, saying that negative press and cascading federal and state investigations had driven away customers and made it impossible for the firm to remain in business.

The company, whose principal owner is the wealthy Republican donor Robert Mercer, offered tools it claimed could identify the personalities of American voters and influence their behavior. Its psychographic modeling techniques underpinned Cambridge's work for the Trump campaign in 2016.

But the firm found itself at the center of a trans-Atlantic furor after the Times and Observer articles appeared. It was then dealt another blow when a British news channel broadcast undercover video in which Alexander Nix, the company's suspended chief executive, suggested that the company had used seduction and bribery to entrap politicians and influence foreign elections. 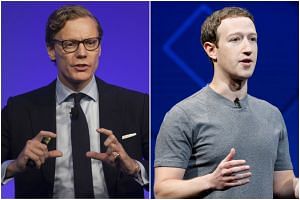 The federal investigation in the United States appears to focus on the company's financial dealings and how it acquired and used personal data pulled from Facebook and other sources, according to the US official.

In a sign of the inquiry's scope, one of the prosecutors involved is the assistant chief of the Justice Department's securities and financial fraud division, Brian Kidd.