WASHINGTON (REUTERS) - A Russian Internet agency oversaw a criminal and espionage conspiracy to tamper in the 2016 US presidential campaign to support Donald Trump and disparage Hillary Clinton, said an indictment released on Friday (Feb 16) that revealed more details than previously known about Moscow’s purported effort to interfere.

The office of US Special Counsel Robert Mueller charged 13 Russians and three Russian companies. The court document said those accused “had a strategic goal to sow discord in the US political system, including the 2016 US presidential election”.

In one case, it said, the Russians paid an unidentified person to build a cage aboard a flatbed truck and another to wear a costume “portraying Clinton in a prison uniform”.

The surprise 37-page indictment could alter the divisive US domestic debate over Russia’s meddling in the 2016 election, undercutting some Republicans who, along with Trump, have attacked Mueller’s probe.

“These Russians engaged in a sinister and systematic attack on our political system. It was a conspiracy to subvert the process, and take aim at democracy itself,” said Paul Ryan, Republican Speaker of the House of Representatives.

The indictment is silent on the question of whether the Trump campaign colluded with the Kremlin, which Mueller is investigating.

In a tweet on Friday, Trump said: “Russia started their anti-US campaign in 2014, long before I announced that I would run for President. The results of the election were not impacted. The Trump campaign did nothing wrong – no collusion!”

US Deputy Attorney-General Rod Rosenstein, who oversees Mueller’s work, told reporters in announcing the charges that the investigation was not finished. The special counsel’s office last year charged four other people.

The indictment broadly echoes the conclusions of a January 2017 US intelligence assessment, which found that Russia had meddled in the election, and that its goals eventually included aiding Trump. In November 2016, Trump won a surprise victory over Democratic Party candidate Clinton.

Mueller’s indictment did not tie the meddling effort to the Russian government. But the earlier US intelligence assessment said Russian President Vladimir Putin ordered a campaign to influence the US election.

Trump has never unequivocally accepted the US intelligence report and has denounced Mueller’s probe into whether his campaign colluded with the Kremlin as a “witch hunt.”

Some of those charged, posing as Americans, communicated with unwitting individuals associated with the Trump campaign, the indictment said. Last year, two former Trump campaign aides pleaded guilty to lying to the FBI – charges brought by Mueller’s office.

The indictment of the Russians, coupled with the FBI disclosure that it failed to heed a warning about the Florida high school shooter, were blows to the White House, still reeling from the fallout of a scandal involving a former aide accused of domestic abuse by two ex-wives.

Trump, who had hoped to focus the entire week on his infrastructure proposal, was closeted in the Oval Office as the reports rolled in, and his communications team was slow to respond to the ever-growing list of queries.

Rosenstein told a press conference: “The defendants allegedly conducted what they called information warfare against the United States, with the stated goal of spreading distrust towards the candidates and the political system in general.”

The indictment describes a sophisticated, multi-year and well-funded operation, dubbed “Project Lakhta”, by Russian entities to influence the election, beginning as early as May 2014. 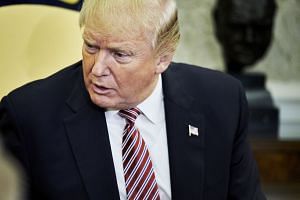 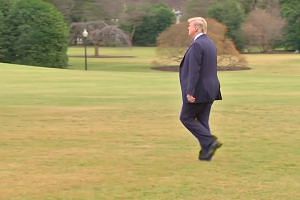 Mueller also on Friday reached an agreement with an American named Richard Pinedo, who pled guilty to aiding and abetting interstate and foreign identity fraud by creating, buying and stealing hundreds of bank account numbers that he sold to individuals to use with large digital payment companies.

According to a source familiar with the indictments, Pinedo is the person cited in the document as helping the Russian conspirators launder money, as well as purchase Facebook ads and pay for rally supplies, through PayPal Holdings.

Pinedo’s attorney Jeremy I. Lessem said in a statement that “Mr Pinedo had absolutely no knowledge of the identities and motivations of any of the purchasers of the information he provided”.

The Russians sought to measure the impact of their online social media operations, tracking the size of US audiences reached through posts and other types of engagement, such as likes, comments and reposts, according to the indictment.

The Internet Research Agency was registered with the Russian government as a corporate entity in July 2013 and the St Petersburg location “became one of the organisation’s operational hubs”, for the project, the indictment said.

The organisation employed hundreds of people, ranging from creators of fictitious person to technical experts, and by September 2016, its budget was in excess of US$1.2 million (S$1.9 million), the court document said.

Director of national intelligence Dan Coats told the Senate Intelligence Committee on Tuesday that he had already seen evidence Russia was targeting US elections in November, when Republican control of the House of Representatives and Senate are at stake, plus a host of positions in state governments.

The indictment said the Russians it charged tried to destroy evidence of their crimes.

For example, in September 2017, one of the defendants wrote an e-mail to a family member stating: “We had a slight crisis at work: the FBI busted our activity (not a joke). So, I got preoccupied with covering tracks together with colleagues.”

The e-mail continued: “I created all these pictures and posts, and the Americans believed that it was written by their people."